May 29, 2016
Yesterday we went to the Braves game.  It was a bobblehead game and Mr. Yoy has quite the collection of bobblehead dolls, including one of himself.

The plan was to arrive early, as only the first 20,000 fans in the door will receive a bobblehead.

Unfortunately, Mr. Yoy grossly underestimated the time it would take to drive there, park, and walk in with two little guys in tow.

The bobbleheads were gone.  Had been gone since 3PM. Current time was 3:50.

The Yoys were upset as Mr. Yoy had talked up these bobblehead dolls.  They had no idea what they were but they were disappointed with a capital D. But they recovered well and the CFA milkshakes seemed to assuage their feelings of sadness and deprivation.

But not Mr. Yoy.  He was devastated. He looked around at the families of 5, 6, 7 people all carrying around the bobblehead dolls.  He schemed up ways to get one.

WE COULD WAIT UNTIL EVERYONE IS REALLY DRUNK AND HOPE THEY LEAVE THEIR DOLL UNDERNEATH THEIR SEAT.

MAYBE THAT GUY OVER THERE WILL LEAVE HIS ON THE CONDIMENTS STAND.

We left in the 8th inning as the Braves were up big and the kids were cooked.

We walked to the car in bobblehead defeat.

I gave the man selling dollar store glow sticks on the side of the street the evil eye as he pointed out to my children that their mother had walked by him and not purchased a glow stick for them.

We waited at the light with a crowd of fans watching for the go ahead from APD to cross.

EXCUSE ME, DID YOU GUYS GET BOBBLEHEAD DOLLS?

I turned around to face a couple in their 50s.

OUR DAUGHTER IS GROWN AND SHE WON'T BE INTERESTED IN THEM.  WE HAVE TWO.

I looked at Mr. Yoy.  His eyes were bugging out of his head, but he played it so cool.

I profusely thanked the woman as she handed the dolls to the boys.  They jumped up and down with delight.  Mr. Yoy included.

Once we had split off from them, Mr. Yoy began his handiwork on our kids in at attempt to coerce them to agree to share one doll so he could put the other one up in his office.

So I wanted to publicly thank the couple who so graciously gave away their bobbleheads, so that my boys (all three of them) could go home happy. 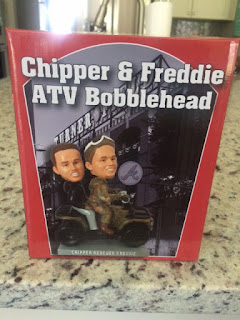 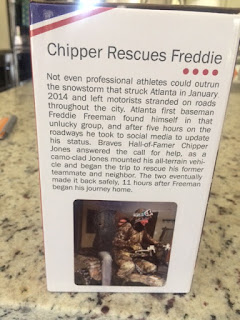 The Story Behind the Doll
bobblehead braves mommy blog