The Yoys: It's A Hard Knock Life

For the most part, I still help my kids get dressed in the morning. Ditto for bath/shower time and about everything else in their lives.

It's not that I don't want them to be competent humans.  I have nightmares of Little E calling me up from college to have me swing by his dorm and adjust the velcro on his XW New Balances. That's right, because I never taught him how to tie his shoes.

Here's my problem: I'm Type A. Like bad. And I want things done quick and I want them done right and I am always running short on time.

And that is how I find myself with an almost 6 year old and a 7 year old who still "need" help. They are capable of doing it, but they know I will do it for them.

But I've recently seen the light, folks. Big E turns eight this fall. Eight is old. I remember being eight. It was 1984. I was old enough to buy this record: 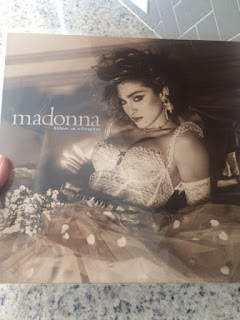 So I was probably old enough to dress myself and clean my armpits.

When I stumbled upon these guys at Target this week, I knew it was divine intervention. 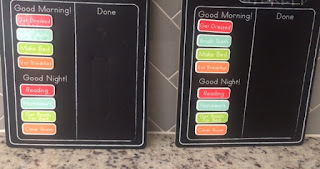 Chore charts for $3. I was sold. But basically, I'll buy anything from those front bins in Target. (Can I get an AMEN?)

They have basic operating functions on the magnets such as MAKE BED and BRUSH TEETH. They also have magnets you can customize.

Here are some potential custom chore magnets I've been working on.

USING TISSUES INSTEAD OF FINGERS

NO EXCESSIVE OR POINTLESS TANTRUMS

If the Yoys move all of their chores from the left column over to the right column during the day, they receive a dazzling sum of 50 cents.

THIS IS NOT WHAT I'M ASKING YOU TO DO. JUST MAKE YOUR DAMN BED AND PUT YOUR DIRTY CLOTHES IN A HAMPER. ANY HAMPER.

It's been about a week, and I've seen some dramatic improvements.  Each night, I remind the boys that they must be dressed in the morning for camp before they go downstairs. AND they do it.

They've also been bathing on their own. I'm unsure how clean they actually are, but babysteps.

So thank you, $3 chore chart. Thank you!