The North (But Then Things Went South Fast) Face

November 22, 2016
Happy Thanksgiving, guys! In observance of Thanksgiving, Cobb County graciously gave me my offspring for an entire week. What is this about? I'm pretty sure when I was growing up, we had like two days off. MAX.

But not here in the land of wonky school schedules. It's me and them for an uncountable number of days straight.

Coinciding with their week off, the weather quickly turned from a typical Maine summer day into a Siberian Christmas.

I took this opportunity to order my first North Face coat.  I had tried it on back in August when Mr. Yoy and I had visited Boston. Although I'm all about an impulse purchase, I decided to hold out until it was legitimately cold.

My coat arrived yesterday. I ripped open the package and immediately modeled it for my kids. They were less than impressed. 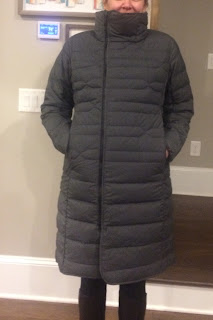 It was basically like wearing a blanket, which was my goal, but it made me look like a giant box with twigs coming out the bottom. Spongebob. Spongebob wearing a gray coat.

Regrettably, I decided today was the day I'd run by The North Face store in Buckhead to try on a size smaller to see which fit better. And the Yoys were coming, too.

They immediately protested. They refused to get dressed, but I wasn't scared. Sure, wear your pajamas around town. Look like a hot mess. I'm forty now and too old to care. Little E went jacket-less to really hammer home his look.

I knew my time at The North Face would be very limited. I wanted to stay and wrap myself in all of their glorious jackets, vests, and hats. But the Yoys made sure everyone knew they were there. They harassed mannequins, slammed themselves into walls, and ran laps.

WHAT PART OF STAND RIGHT BY MOMMY IMPLIED YOU WERE TO ACT LIKE YOU WERE IN A UFC DEATH MATCH?

The sales woman was beyond gracious and immediately engaged the boys, which helped tremendously.  I apologized profusely, leaned over, and whispered bone-chilling threats into my beloveds' little cold ears.

In the end, I exchanged my coat for a different style. The small was about seven slices of Publix birthday cake too tight, which was a bummer.  The new coat was 30% off, which was not.

Stay warm and Happy Thanksgiving from the Yoys!