This morning started out like any other.  Early, dark, and cold.  I got both Yoys up, dressed, fed and ready for the bus in 25 minutes flat.

Soon after Big E finished eating his breakfast he began to complain his belly hurt.  I told him to go to the bathroom.  He refused and instead decided to clean up his playroom.

I knelt down and looked him right in the eyes.

DOES YOUR BELLY REALLY HURT?

There was some serious overacting happening with him which led me to believe this was all a fake job.

Big E moaned and yelled in pain and I told him if he was really sick to get into bed and that was where he'd remain the rest of the day.

After Little E got on the bus, I came back inside and checked on Big E.  He was in bed writing in his journal.

Big E was really covering all the bases, but I still didn't believe him.  I've seen this kid ill before.  And he looked bad.  Today, he just looked guilty.

Big E stayed quietly in his room for about an hour, but then came out to ask if he could watch some TV.

SICK LITTLE BOYS STAY IN THEIR BEDS ALL DAY.  NO TV.

He kept running back and forth between our bedroom and his, further casting doubt on his belly ache.  The last thing I want to do when my stomach hurts is go for a run.

We had plans go to Uncle Yoy's to celebrate Chanukah later today.  Big E was not going to be able to go because he was either sick or lying about being sick, which is a big time no-no in my book.

I tried to call his pediatrician to schedule an appointment, and Big E hung up my phone in pure fear.

Mr. Yoy and I talked to him about lying and why he didn't want to go to school and he FINALLY came clean a little after 9.

He was bored and tired of taking "testes".

Mr. Yoy told Big E to get dressed while he got cleaned up for work and he'd drop him off at school.  And Big E agreed. 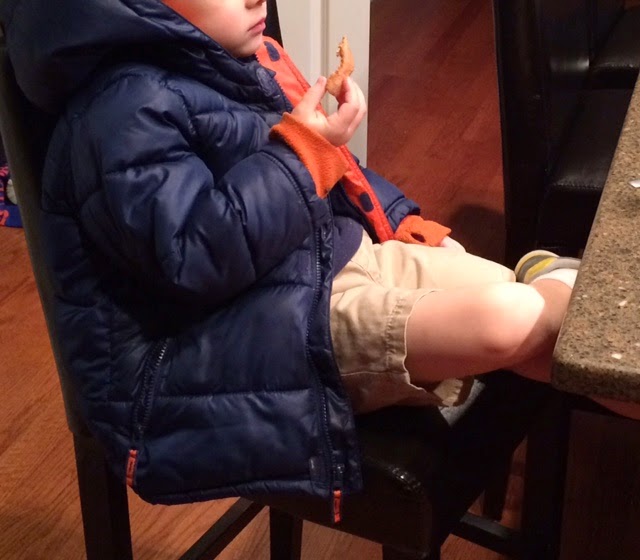