In order to generate some Jewish buzz around here, and in an attempt to use presents as bribery for good behavior this week, I wrapped their presents and laid them out beautifully in our dining room. 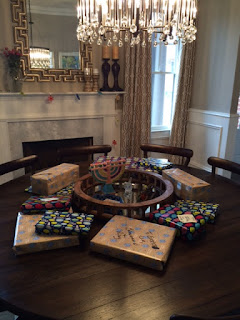 This year, I purchased both boys Kindle Fires.  They went on sale for $35, so I decided it was worth not constantly having my phone commandeered by Big E.

My phone always returns to me sticky, which was puzzling until I witnessed Big E cleaning the screen with his tongue.

Let's all take a moment to digest that.

The boys have been circling their gifts since they made their appearance on the table.

Big E has been acting super sketchy and I finally figured out why.

That little stinker took a peak at his presents.  He has the worst liar face in the history of mankind.  It is a trait that will serve me well into his teenage years.

We told him that we have a video camera set up in the room and we would pull up the footage.

But bottom line is, he's BUSTED.

Mr. Yoy and I have both been known to present snoop as children so we aren't necessarily mad at that, we are just upset that he continues to lie about it.