A Time To Sweat

August 31, 2016
Hot on the heels of my Prada blog, I present to you another first world problem.

Last night our air conditioning unit went on strike. We have one unit with three different zones. Zones one and three kept right on plugging, which sounds great, but zone two is responsible for the area we sleep in.

WE'LL ALL BE DEAD BY MIDNIGHT. - Big E's Morbid Prediction

In summary: we burst into flames as we lay restless in our beds, dreaming of popsicles, Alaska, and the Costco freezer room.

Luckily for us, today we had scheduled a work day with our builder to come by and fix some things. We just added HVAC to the list.

In preparation for the visit with the HVAC guy, I had to turn off the entire unit. His time window was between 1-6 and this gave me plenty of time to begin perspiring. Although we are knocking on September's door, Atlanta's 90 degree days have been merciless.

I told our builder rep that I had to run to the bus stop around three, but I was hoping the guy would be to the house before then. There is only so much my deoderant and a spray of Febreeze can mask.

Unfortunately, the HVAC guy showed up right as the bus dropped off the Yoys. Which meant we would all be together.

The first hour after my kids get home from school is my least favorite.

I HAVE A BALL OF POOP IN MY PANTS FROM EARLIER!

MY TOOTH JUST FELL OUT IN MY APPLE!

The HVAC guy goes to work and I settle Little E down enough to tackle his homework.

We are all glistening like a scene from A Time To Kill except I don't look like Ashley Judd and HVAC guy sure as sh*t doesn't look like Matthew McConaughey.

Little E has to turn this picture of Italy into a picture that tells a story. You could turn it in any direction and add anything onto it. A woman in knee-high Stuart Weitzman boots playing soccer? Perhaps. A tree holding a bee hive? Possibly. 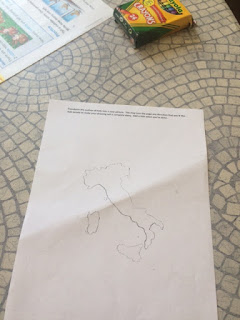 The heat must have melted Little E's brain because his strategy was to turn this into a map of the world. I gently tried to explain to him that his teacher was looking for something a little more out of the box. I have to use kid gloves with Little E and homework because it can go so wrong so fast.

And Big E took care of that for me. He picked up this Lego boat Little E had worked on yesterday, held it in front of Little E's face and dropped it onto the floor. Upon impact, it shattered into a thousand tiny pieces I would step on later.

The shrieking, oy, the shrieking. This homework will never get done. I tried to talk him down from his Lego ledge. But the heat was definitely affecting my parenting skills. 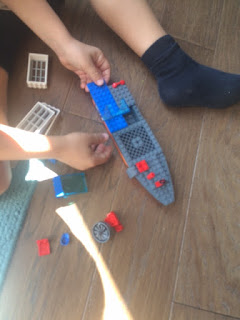 I pleaded with Big E to put it back together, but he couldn't remember what it looked like, allegedly.

The HVAC came downstairs to give me the news.  At this point, he was just a blurry figure standing in my kitchen as my eyebrows had long lost the battle with my sweat.

More shrieking (mostly from me).

HVAC claimed my unit had too much construction debris built up and that he had cleaned it. Everything was back up and running. And he bolted before I could truly confirm this thing was working.

I spent the next three hours staring at the thermostat and willing it to cool down. 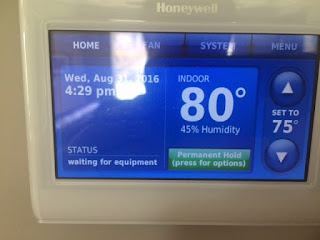 Mr. Yoy said he's not coming home until it cools down to 75 degrees. We are still not there.
air conditioning homework Lego mommy blog