September 01, 2016
We are finishing up our fifth week of school. We are mostly in the groove.

Mornings are always sketchy as hell because, while I am a morning person (rainbows, singing, smiling), my kids are not. Especially, Little E who I have to wake up every single morning. Left alone, he would sleep until eight, just like Mr. Yoy.

If I could get them to bed at seven, mornings would be better, but no matter how hard I try, the 7PM bedtime is merely a myth here at the Yoys. Like seeing Mr. Yoy during daylight hours or good East Cobb Sushi.

The bus comes around 7:30AM. I try to have the boys out of the house by 7:20. A 7:30 pickup might not sound so bad to some of the other local moms, but the kids are late to school every day. This means Little E doesn't have time to do his morning work, which means additional work is sent home at night. It isn't ideal. But I'm not upset enough to complain, as our bus pick up time at the beginning of last year was 6:56. Yes, that time starts with the number six. And even Little Miss Morning Sunshine can't drag her a** out of bed before 6:30.

This morning we received the frantic BUS!!! text from one of my neighbors as I pleaded with Little E to put down his unfinished breakfast and head out the door. For the record, he refused and turtle walked to the bus stop while eating a bowl of soggy cheerios, milk dribbling down his chin onto his shirt the entire way.

So when this came home with the Yoys this afternoon, I knew we were doomed: 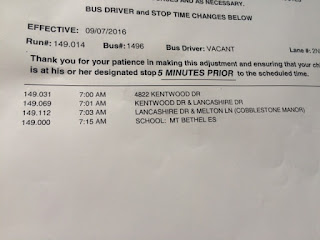 We just lost thirty AM minutes. This is the equivalent to several hours in afternoon time. It immediately put me in a bad mood and I called Mr. Yoy to vent.

And he laughed like a woman in the throws of hysteria. (Sympathy may not be his strong suit.) I sent murderous vibes through the telephone and noted that while he remained snug in bed EVERY MORNING while I feverishly got these kids ready for school, we would make sure to be extra loud going forward.