MOM, IS THIS HEAVEN?

I wanted to answer yes, but I brushed off the suggestion.  Everyone knows that heaven has unlimited white wine and pizza and no one ever gets fat.

I left the store with the Yoys in tow while Mr. Yoy lingered behind eyeballing the life-sized gummy bears.

I looked down at Big E.  Why was he chewing the cud?  I grabbed his face and took a look inside his sweet smelling mouth.  It was candy corn city in there.

BIG E!  WHERE DID YOU GET THAT CANDY CORN?  DID YOU STEAL IT FROM THE STORE?

Big E went on the defensive.  He swore to both Mr. Yoy and I that he didn't steal anything.

A LADY PUT IT IN MY MOUTH!

This is your strategy?  Pretend there is some creepy lady in the candy store force feeding candy corn to all the children? (After telling this story to my friend Lady J, she agreed that while this theory is a long-shot, I should not write off the crazy grandma suspect).

Mr. Yoy was about to drag a visibly upset Big E back into the store to confess his crime and face his punishment.  Instead, he went back in solo and bought a bag of candy hot tamales, which he disguised as cherry Mike & Ike's.

Big E grabbed three and shoved them in his mouth.  He chewed twice.  Then he began screaming and crying.  He spit them out into my hand.

THEY ONLY SERVE HOT TAMALES IN JAIL.  REMEMBER THAT THE NEXT TIME YOU EVEN THINK ABOUT TAKING SOMETHING WITHOUT PAYING.

For a child that thinks pineapple is spicy, this was the perfect punishment.

I've let the events of Sunday stew for a few days and I'm not sure if I'm more upset that Big E stole candy corn or that he continued to lie about it for the better part of an hour.

Either way, I hope this is just a blip on the radar and not the signal of the beginning of Big E's moral decay. 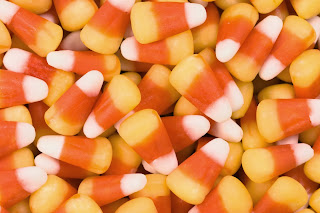