What Happens In Vegas Stays In Vegas

I tagged along with Mr. Yoy last week to his first shareholder retreat in Las Vegas.  And not scuzzy, Bally's Las Vegas.  I'm talking the Bellagio.  He wasn't allowed to go without me.

With minimal begging, we convinced my parents to fly up to Atlanta to watch the Yoys while we spent three days in Sin City.

Mr. Yoy had boring work stuff during the day so I was on my own.

But don't cry for me.  I treated myself big time.

Below is a partial list of the amazing things accomplished during my vacation from being a responsible parent:

1)  I woke up at 6AM Vegas time and worked out.  Don't roll your eyes at me, I never get to work out without checking the clock and my cell phone for calls regarding my children.  And the gym was packed.  I'm stuck on Eastern Standard Time, what's your excuse?

2)  I spent four glorious hours in the Bellagio Spa.  Four hours cost me approximately 65% of one month's worth of Little E's preschool tuition.  Yep.  I did it.  And I'd do it again.  Can you say eucalyptus steam room?

3) I ate meals alone.  With the exception of my Kindle.  And no one was touching me with their greasy, boogery fingers.  And I could consume my food at a rate safe for humans.

4) I drank alone.  Well, only because the bartender felt bad I was eating my salad alone.  I didn't care, but thanks for the ice creamy Kailua shots.

5) I ran up and down the strip treasure hunting for the Bank of America ATM.  While the Yoys enjoy dropping c-notes at the craps table, we refuse to pay the $7 ATM fee at the Bellagio.  The weather was amazing, I had spotify pumping in my ears, and I just keep running.  Like Forrest.

6) I laid in bed and watched a Law & Order marathon.  In my past life, I was all about a L&O marathon.  Showering, eating, and using the bathroom all fell by the wayside once Detective Lennie Briscoe appeared on my television.

7)  I took a thirty minute shower.  I had no audience.  No little boys pressing their faces up against the glass door asking for milk.  Or to wipe them.  Or whatever the hell they are always coming up with.

8)  I played the Wheel of Fortune slot machine.  And (over)enthusiastically cheered myself on, while drinking bad white wine and winning dazzling amounts of pennies.

While this Vegas trip looked markedly different from my last, pre-Yoysers trip, it was still amazing.  I came back to the ATL feeling like a whole new Mrs. Yoy.

This feeling had all but evaporated by the next morning, but I could still vaguely remember it.  Like labor pains. 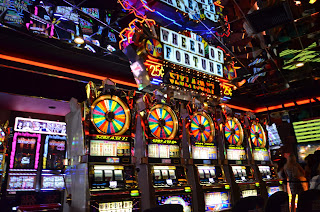