December 13, 2013
We spent a significant amount of time in the van today.

And we don't have the super duper fancy van with televisions in the headrests. We have the baseline van.  The one where you are forced to have conversations with your children.

If you know Mr. Yoy, it will come as no surprise to you that there is a great deal of talking going on during our drives.

Below are today's hot topics in no specific order:

1) My Barbie Collection.  I was way into Barbies.  I had the townhouse, the car, even Skipper.  Big E wanted to know if I played with toys even when I was ten. My memory is vague, but I think I played with my Barbies until then.  I mentioned that to Big E and he was immediately intrigued.

WHAT HAPPENED TO YOUR BARBIES?

WHY DID YOU GIVE THEM AWAY?

And finally, he cried.  Because he was sad that I gave all my Barbies away and he couldn't play with them.

I answered him honestly.

I HOPE NOT!  (Not because I don't love him, just that it'll be hard to commute to and from Harvard from Atlanta's Westside.)

This brought up feelings of anxiety.

BUT WHERE WILL YOU BE LIVING?  WHY CAN'T I LIVE WITH YOU FOREVER?

And finally, he cried.  Because he was sad that as a twenty year old male, he wouldn't be snuggling with his mommy in her bed.

3) Volcanos.  This one is on me because I let him check out some doomsday children's book about Pompeii.

WHAT HAPPENED TO ALL THE PEOPLE THERE?

WHY COULDN'T THEY BREATHE?

WHAT IS MOLTEN LAVA?

I try not to lie to him, so I dropped the bomb that they were all buried alive. That went over swimmingly and led very nicely into our next topic.

But not before he made me promise there were no volcanoes in the metro. Although I can't really vouch for Kennesaw Mountain.

4) Cemeteries.  We drive by a cemetery every day, but only recently has Big E taken notice of it.  I think the whole Halloween/spooky/tombstone thing has really piqued his interest.

WHAT HAPPENS WHEN YOU DIE?

WHEN WILL YOU DIE?

WHEN WILL I DO?

WHAT DOES IT SAY ON YOUR TOMBSTONE? (That I was an awesome mother and funny writer!)

And finally, I cried.  Because I was having the most intense and random conversation with my child while trying to navigate Atlanta traffic.

My next car will come equipped with the built in entertainment system and possibly a second row privacy window. 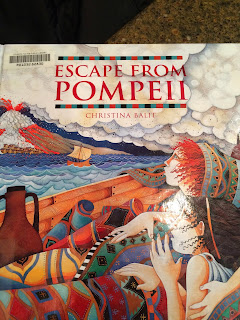