Sometimes, I may want to act like one, but I can't.  Because I'm it.  If I lose my nerve and run screaming from what life throws at me, who will protect my kids?  No one.  So I get a grip and soldier through.

I've seen some nasty stuff in the past five years.  Stomach turning, lunch reversing, sh*t that nightmares are made of.

But nothing skeezes me out as much as curdled, moldy milk.  The smell, the texture, all of it.

This afternoon, in a spring cleaning frenzy, I attempted to straighten up our bedroom closet which is in a constant state of ransack.

I ran my hands under the row of cute summer shorts that I was beginning to feel like I'd never wear again.  I pulled out a couple of shirts that I'd thrown on the ground during a previous attempt of putting together an acceptable outfit.

Then I felt it.  A sippy cup.  Before I pulled it out into the daylight, I prayed it was water. Please. Be water.  Just this once, as I was still recovering from the sippy cup I'd retrieved from under the third row of the van.  FYI, I entered that cup into Big E's school's science fair.  And won.  Just saying.

Back to the closet.

I took a deep breath and held the cup up to the light.  It was my worst fears confirmed.  Chunky, blackish, milk circa 2012.  I gagged as I ran the cup straight out to the garbage can.

WHAT OTHER THINGS ARE GROWING/LIVING IN THE ABYSS OF MY CLOSET?

I NEED TO CLEAN UP MORE OFTEN.  THIS EPISODE COULD HAVE BEEN AVOIDED!

THESE THINGS ALWAYS HAPPEN IN THREES!  WHERE IS THE THIRD CURDLED MILK SIPPY CUP HIDING?

Our trash BETTER come tomorrow as I can barely function just thinking of that cup sitting at the end of our driveway.  Making the rest of our regular trash extra nasty. 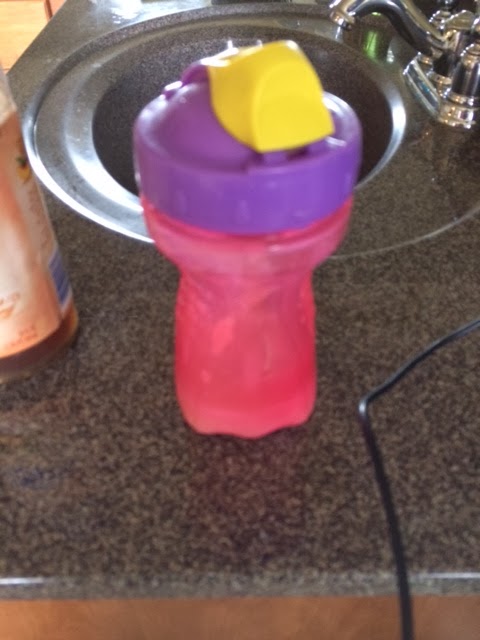 The picture really doesn't do it justice.  And yes, I took a picture of it.