February 21, 2014
I almost made it through the day without anything blog-worthy.

The boys were asleep.  I was preparing to take a long overdue shower.  It had been a rough day of crossfitting, manicuring, eating, and playgrounding.  I had been outside with the boys for the better part of four hours this afternoon.  I was smelly and tired.  A shower was just what I needed to recharge enough to get through some Yoy administrative work.  Mr. Yoy had a dinner thing, so I anticipated a quiet night at home.

I peeled off my workout clothes and dropped them into the empty laundry hamper (pat myself on the back for that one).  I took two steps towards the bathroom and there I saw him.  He stood a mere three feet tall, but his presence was grand enough to startle me.

I shrieked with fear.

I stumbled backwards and my foot got stuck underneath the ottoman.  All bets were off.  My limbs flailed and I fell back onto the chair.  It was a fall of epic comedic proportions.  Melissa McCarthy would have been mad jealous if she saw this move.

Big E just stood there.  Mouth open.  Then he laughed.

Not me.  I cried.  The reaction I have to pure, unadulterated fear is tears.  This is the second time Big E has done this to me, and I've had the same reaction both times.

In exchange for the attempted heart attack, I hope Big E has seared into his brain the image of his haggard mom tripping over herself and busting a** onto a chair.  All without a stitch of clothing on. 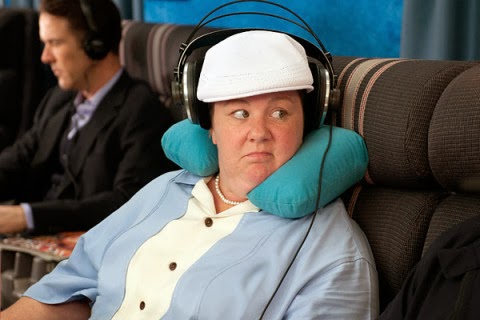 She's got nothing on me!