Little E: Off With His Head!

The peace and fun and relaxation I felt as I drank wine and watched the sun set over the lake was all but eaten up on the 4+ hour return flight from Sacramento.

In general, the Yoys were pretty well behaved on both legs of our Tahoe trip.  They numbed their minds with leap pads and mindlessly ate for most of the flight.  I was fine with that.  There was no screaming or yelling or other disruptive behavior.  This was, by far, the longest airplane ride I've taken with them, and was prepared for the worst.  I had applied deodorant upon deodorant and I was all set to buy airplane bottles of Chardonnay for me and anyone in the surrounding rows if things really got sketchy.

As we prepared to take off from Sacramento, our friendly Delta pilot came on the PA and warned of rough air over the rockies, more specifically Pueblo, CO.  He was very precise regarding the location which we might potentially fall out of the sky.  I am not the most comfortable flyer.  I fake it in front of the boys because I don't want to poison their thoughts with my irrational fear of flying.

I brushed it off.  Oh Big E, it's just some fun, air bumps.  Internally, my mind was stringing together some very bad words.

Once we were airborne, I pulled up the flight tracker on the screen in the seat in front of me.  I zoomed in on the map so I could see exactly when we would be approaching Pueblo.

I could feel my heart rate rise as our plane crossed into Colorado.  This was it.

Oh, Little E.  This was really bad timing.  All I could think about was the scene from Airplane 2.  Why that man was shaving in bathroom on an airplane, I'll never know, but the visual has stuck with me for years.

I had a decision to make.  I could persuade Little E to delay his bathroom trip until Oklahoma.  Or I could chance and hope both our heads don't end up plowing through the bathroom ceiling.

I chose to overcome my fears.

I quickly unclipped Little E and myself and hightailed it to the bathroom.  As we exited the tiny stall, we started to bump around.  I ordered Little E to hurry back to our row.  Except the beverage cart was blocking us.

I yelled for Mr. Yoy who was able to get the flight attendant to push the cart up a few rows so we could get in our seats.

Little E was horsing around.

SIT BACK IN YOUR SEAT RIGHT NOW!

Maybe I overreacted.  But I have read one too many stories of passengers hitting the ceiling of the planes because they weren't belted in.  And we were currently flying over ground zero, Pueblo.  At any moment we could drop 100 feet.

Little E flung himself back.  He was sitting in an aisle seat and he managed to move his giant noggin right into the path of the moving beverage cart.

In slow motion, I watched as my son was almost decapitated by Coke Zero and other Coca-Cola products.

Little E moved his head out of the aisle just in time.  The urgency in my voice startled him and he began to sob.

Good thing the beverage cart was right there.  Because this mom needs some cheap wine.  STAT. 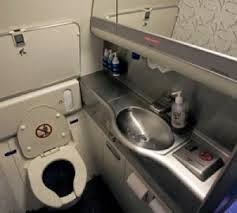 Not where I wanted to be as we flew over Pueblo, CO.
airplane bathroom Lake Tahoe mommy blog