June 11, 2015
Last week, my parents and I took the Yoysers to the bowling alley to get their strikes on.  When it rains in Florida, which is almost every day, you have to have a go-to list of indoor activities.  Bowling is numero uno for my boys.

After we wrapped up our two hour, yet only ten frames of bowling, the boys made a beeline for the arcade.

This is not the arcade of our youth.  There is no Pac-Man.  Or Space Invaders.  Or anything you remotely know how to play.  And everything spits out tickets. Except you need an obscene amount of tickets to win anything noteworthy and each game costs like 75 cents to play. 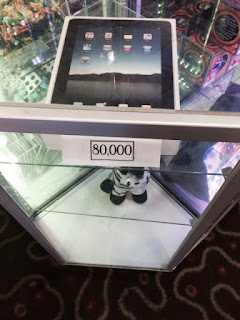 For only 80,000 tickets you can buy a low-end iPad.  We spent about $10 and earned approximately 50 tickets.  Based on these numbers, this iPad costs (hold on...let me do the algebra) ~$16,000.  Basically a bargain by my kids' standards. They had their eyes on that prize.

We all tried valiantly to earn the Yoysers as many tickets as possible.  We so wanted them to win a $16,000 iPad. 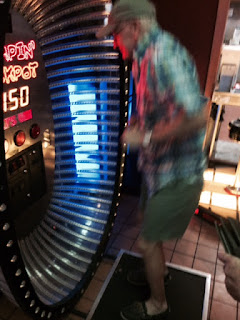 My dad played this game where you jump on a scale as hard as you can and win tickets based on your force.  This is the opposite of my Weight Watchers meetings where woman are stripping to their undergarments to lose a few tenths of a pound.

Poppy won five tickets, but he also won a lifetime of back problems, as I think he compressed some of his spinal discs during his big jump.

We pulled the plug on this money suck and headed back to the prize counter. 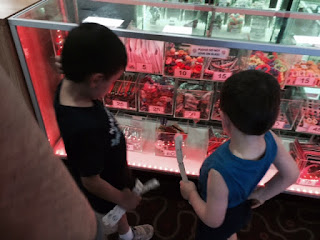 There was much discussion and politicking between the boys.  They were a mere 79,950 tickets short of the coveted iPad.  After a heated argument, some pushing, and murder screams, the boys went with these guys: 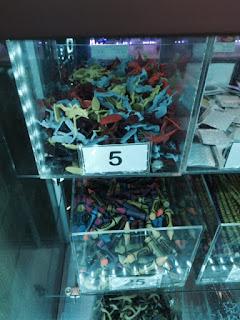 In summary, we spent $10 for two BPA-laden army guys and two of these plastic semi-spheres that pop off the ground.

And with that, I scratched the bowling alley off the list.