Greetings From the 'Burbs

I know.  It's been a long time.  And you've probably given up on me.  And for that, I'm sorry.  We moved. To the suburbs.  And it has taken about a month to let that sink in, to unpack, and to finish my book club book, which is tonight.  I didn't feel like I had the luxury of writing until I had all my chores done.

We have settled into our new life here in East Cobb.  The Yoysers are adjusting well to the new school and I have made some lovely new neighbor friends.

But of course, it wouldn't be us, if I didn't have any insane stories to tell you.

So here we go, folks.

This is the second year that the boys have taken the school bus to school. This was one of the few things they didn't have to adjust to.  They climbed the steps onto their new bus and were off.

Their bus driver is a no-nonsense woman.  She keeps things in order because she drives 100+ 5-11 year olds to school and that is the only way to get it done.  And I appreciate that.

Unfortunately for my sons, they received the wrath of her no-nonsense.  The Yoys like to sit together on the bus.  I like it because they can keep an eye on each other.  But sometimes, they make up psychedelic games that manifest in the form of "WHO CAN POKE YOUR EYE OUT FIRST?"

One Friday the bus pulled up.  The protocol calls for each student to identify his mom/dad/nanny/neighbor before they can be let off the bus.  When it came time for Big E to point me out, she called me over. And not in a friendly manner.

I was shaking in my boots as I dead-man walked to the bus.

And she unleashed on me.

THEY ARE NOT ALLOWED TO SIT TOGETHER GOING FORWARD!  THE BIGGER ONE POKED THE SMALLER ONE'S EYE OUT AND HE HAS BEEN SCREAMING AND CRYING THE WHOLE WAY HOME!

I agreed with her.  No more sitting together.

I've been on plenty of drives where the back seat resembles an Ultimate Fighting Championship match.  They poke and pinch and scream and cry.  Weapons transform out of legos and crayons.

REALLY? YOUR TINKER TOY IS NOW A FIRE EMITTING SWORD?

I have contemplated driving us straight into the highway median it gets so bad.

So I get it, Mrs. No-Nonsense School Bus Driver.

Little E and Big E cried their way down the bus steps. Big E cried on and off for about two hours afterwards.  He was devastated that he wasn't going to be allowed to sit with and/or torture Little E on the bus. Little E was not.

But then a miracle occured.

Because our new neighborhood has enough elementary school aged kids to populate a small army, we were assigned our own bus with a new bus time and a new bus driver.

I was elated as my wake-up time shifted from 6:00 AM (dangerously close to the five o-clock hour) to 6:30 AM (a normal person wake-up time).

Big E was elated because he knew he'd get a second chance to sit with Little E on the bus.

DON'T BLOW IT THIS TIME.

I imparted my motherly wisdom on my sons.  They get assigned seats tomorrow from the new, less militant, Bus Driver.  Hopefully, it'll be smooth riding from here on out. 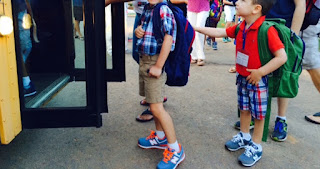