My brother and I were riding our bikes around the front of our rental home.  His ride was a babyish vehicle.  I had a bad-a** Big Wheel.

The only reason I can easily recall this story is my dad filmed the whole thing with his giant video camera. It was like having a news station capturing your life. Or being the star of a reality TV show before they existed.

My five year old self ran inside for a potty break.

My brother looked around and noticed I was gone.  He took this chance to hop on MY BIG WHEEL.

IT'S GOING TO BE WORLD WAR III WHEN SHE COMES BACK OUT. - My dad's narration.

And sure enough it was.

I picked up his little tricycle and hurled it into the street.  I was like the hulk.  But not green.  And this ugly interaction became the stuff of legends.

I still yell this phrase to my brother as a joke.

So imagine my delight as I watched Little E hop onto Big E's Spiderman bike after he had gone inside.  Little E was so proud of himself as he rode back and forth.

Then I heard the door from the house to the garage slam shut.  Big E was back.

And a smile crept onto my face as I knew what was about to happen even before the words escaped his mouth.

And with that, I burst into giggles.

The Circle of Life played in my brain and I felt the urge to hold up Big E to the sun and present him as the gift he was. 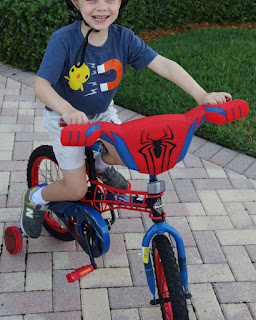