The Yoys: Take A Hike!

January 20, 2016
This weekend brought freezing temperatures to the ATL.

Logically, the Yoys decided to participate in the most outdoorsy activity they could conjure up.  A hike. Outside. With trees and animals and rivers.

Our new neighborhood is surrounded by different trails that all lead down to the Chattahoochee River.  We tried out Gold Branch on Monday.

At the entrance to the trail, the four of us stared at the map and pretended we knew how to use a legend and also that we had any idea regarding the length or difficulty of our endeavor.  And just to make things interesting, the sun was beginning to head down behind the rolling hills of North Georgia. Lets add that we had no water or food into the equation.  It was basically, scene-for-scene, identical to the Blair Witch Project.

So off we headed. And it was peaceful. And beautiful. And it felt good, once my blood started pumping through my pre-hyporthermic limbs.  We made it down to the river in good time.

The Yoys were excited to dip their walking sticks into the Chattahoochee.  That is not a metaphor for anything.  It's just how it was.  We sang Alan Jackson. We were clearly fish out of water. 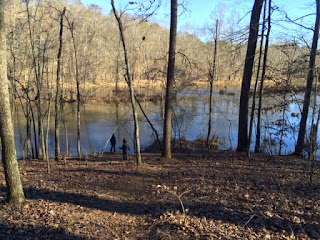 Mr. Yoy only briefly discussed turning around.  He was more concerned with the hike up the looming ridge than I was.  We'll power through!  Just like Yoysers do.

I was rethinking my decision as we climbed the narrow path.  The drop-off was daunting.  I kept my hands on Little E's jacket and my eyes on the ground.  Mr. Yoy was charged with keeping a visual on Big E.

Little E was talking and looking around and I could just see him walking straight off the mountain a la The Price is Right's most beloved Cliff Hangers game. DOO-DEE-DOO-DEE-DOO! 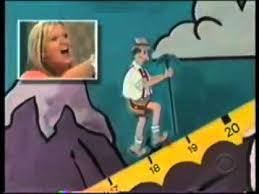 CRAP! THERE GOES MY KID!
Every half mile or so we encountered a map that looked like this. 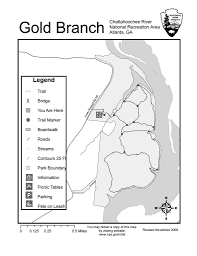 We studied it like we knew where the hell we were going...but did we really?  Mr. Yoy and I earnestly discussed which Yoy we would eat first if we got lost in the wilderness and things got hairy.

For the record, it would be Little E.  He is meatier.

I'm happy to report that after about 90 minutes, we found our way back to the car.  The boys were tired, I was a popsicle, and we were all feeling the effects of a good hike.

We will definitely go back to Gold Branch.  Maybe when it is warmer.  And maybe with a leash for Little E.