This week we have early dismissal every day so that the parent/teacher conferences can happen in the afternoon.

I'm not sure I need a parent teacher conference. I can already summarize it for you below:

Your kid is intelligent, but lazy as hell and has a bad habit of (picking nose/sucking thumb). You can circle the bad habit depending on if this is Big or Little E. It's like choose your own bad ending.

So now I've got seven long a** hours from when they energetically bounce off the bus and when I attempt to put them to bed.

Almost every night at dinner, I give Big E a half of a melatonin to get him to fall asleep. No melatonin means an 11PM bedtime, which makes for very painful 6AM mornings.

Last night, as I prepared dinner, I was chatting on the phone with Mr. Yoy, who has been in California since Friday, but it feels like he's been away since 1998.

Big E eats off a blue plate and Little E eats off a red plate. It's super Type-A, but it keeps them from fighting over mind numbing subjects like how many string beans are on the plate.

They both get vitamins, which I doled out properly. One for me as well, because I'm jonseing so badly for candy that even a vitamin in the shape of a gummy bear gets me pumped up..

I cut the melatonin up and put it on Big E's plate. At least I thought I did. 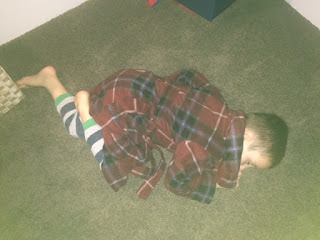 Right in the middle of reading Harry Potter, I looked down on the floor and saw Little E down for the count. And he was out. Snores and all. I had to dead lift him off the ground, with my bad back and it was like lifting a wet noodle.

Big E, on the other hand, folded laundry, built legos, did learning books, and watched some HGTV with me.

At around 10PM it dawned on me.

DID  YOU TAKE A MELATONIN AT DINNER?

At first he said yes, but then he admitted that he hadn't.

SH*T! I DRUGGED THE WRONG YOYSER!

Around 11PM, Big E finally dozed off next to me.

Tonight, I will pay better attention.