October 21, 2016
It's family picture eve. This is a pretty big holiday around here.  Brainstorming sessions, wardrobe, etc. We take our yearly holiday card very seriously and the family picture is crucial.

I've worked hard this week to hold my crazy in check.

I didn't cut or file their fingernails, although I knew I ran the risk of Little E slashing up his face.

I let them wrestle out back with their friends.

I sent them to school not rolled up in bubble wrap.

Previous family pictures include Mr. Yoy and a peeling forehead.  He didn't think he needed to apply sunscreen during a mid-day out door sporting event. In those pictures, he's wearing a baseball hat. Another year, Little E had such bad baby acne I debated using concealer on his chubby, little face.

In recent years, we've really pulled it together. I got cocky. I thought I had tomorrow's shoot in the bag.

Until Big E broke out in hives after dinner last night.  They covered his face, arms, and torso. Note, this is Big E, not Little E, the king of hives. Little E pops a chest full of hives just by looking at a fragrant dryer sheet. That kid has the most sensitive skin. Big E has beautiful, olive-toned skin (Thanks, Grandma V!) He never has a blemish. Nothing. My how the tables have turned.

By morning, the hives had mostly subsided with the exception of his face. Of course. After school they were still there, so I gave him a dose of zyrtec and willed them to fade into obscurity.

Not to be outdone by his skin, Big E's teeth decided to make themselves known.  I've previously documented Big E's upper teeth issues. The orthodontist and I have been waiting for this one particular tooth to come out.

And I guess that process started tonight. 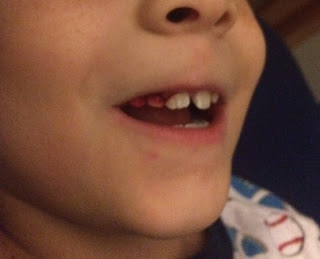 It won't fall out. It just bleeds and bleeds and Big E won't let me touch it. He said it doesn't hurt, which is great. But in the meantime, it looks like he ate someone for dinner.

I asked him to wiggle it with his tongue in the hopes it came out before bedtime. He fell asleep instead.

I'm hoping in the morning that he hasn't eaten that tooth and the blood bath has subsided.

If not, we are going to need some serious photoshopping magic. Or fake teeth and some foundation.