November 20, 2013
Gravity is working against me.
And gravity wants to bring me down.  - John Mayer

On one of our previous airplane trips, I halfheartedly tried to explain to Big E how planes work.  I really know very little about how they work, except they have engines, they crash, and they no longer serve you free meals.

At the time, it was keeping Big E quiet as a mouse so I went on and on as his eyes grew larger and larger.  I threw in gravity at some point, just trying to hammer home how smart I was.  But really I was just bullshitting.

But the gravity thing stuck with Big E.  He brings it up periodically.

Tonight it was while the Yoys were in the tub.

MOM, IS THERE GRAVITY UNDERWATER?

I tried to compose an answer.  I looked at my watch.  It was almost 8pm.  My brain was foggy.  I sat in silence before I threw out some physics catch phrases such as mass, volume, density, blah, blah, blah...

WHAT IN THE HELL AM I TALKING ABOUT AND WHY IS BIG E LISTENING SO INTENTLY?

I wanted to dial up Uncle R, an AP Physics teacher, and let Big E pepper him with questions.  But my fingers were too tired.

IS THAT WHY THIS BOAT FLOATS AND MY SCUBA DIVER SINKS TO THE BOTTOM OF THE TUB?

I snapped back to reality.

I promise, I'm no dummy.  It's just science is not my thing.  It's math.  Math is my jam.  If Big E had asked me if the quadratic equation exists under water, I would have jumped on the chance to explain it to him. 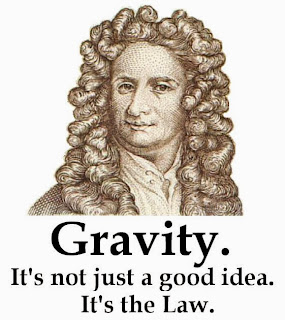