November 04, 2013
For those of you that have been blessed to meet Big E, you recognize him as many things, but shy is definitely not one of them.

At our neighborhood park yesterday, Big E ran into not one, but two of his pre-K classmates.

I watched in amusement as they greeted each other like it was their twenty year high school reunion.  In truth, they had been together a mere 48 hours before.  I guess in little kid world that equates to eternity.

But Big E grew tiresome of the little girls and moved onto bigger and better targets, their dads.

Big E began chatting up these poor, unsuspecting men.  After a few minutes, I went over to rescue these patient souls from my son.

MOM, CAN SO-AND-SO'S DAD COME OVER AND DO LEARNING BOOKS WITH US?

Luckily, dad-turned-victim #1 had to take his daughter to soccer practice.

Phew!  I quickly brushed off Big E's suggestion claiming they already had plans.

Next up, dad-turned-victim #2.  Big E used the same line about coming back to our house to work on his learning books.  Damn, this kid was good.

Again, another awkward silence followed by me reminding Big E that his babysitter was coming soon and we wouldn't have time for so-and-so's dad to come over and do learning books today.  Major bummer, I know.

As I reflected upon our park outing, an idea popped into my sick and twisted mind.

Big E is the ultimate wingman.  Yes, both of these dads happened to be married, but what if I rented him out to my single friends and had him approach all the cute guys at the park.  Or the mall.  Or even a bar (maybe that's a stretch...)! 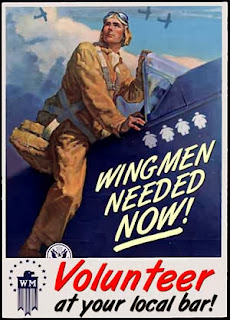