June 21, 2014
Today, our local fire station hosted an open house for the neighbors.

Mr. Yoy was parked at work all day, so I thought this would be a great way to kill some time.

We planned to meet some friends there, but by sheer luck, half of Little E's class showed up.  It quickly graduated from an open house to a house party.  Lucky. For. Them.

The kids attacked the fire trucks and for almost two hours they were in heaven. We joked about leaving them and swinging back by in a few hours.  The fire fighters did not find that funny.  Not even a little bit.

But they were incredibly gracious and even made burgers and dogs for everyone. While our lazy kids sat in the fire station's new black leather recliners, drank water, and watched Disney on their TV.  I kept expecting someone to bark orders into the kitchen.

After lunch, everyone made their way back out to the fire trucks for one last hurrah.

If I could read the fire fighters thought bubbles, they would say:

WHY IN THE WORLD HAVEN'T WE BEEN CALLED OUT FOR A FIRE IN THE PAST 135 MINUTES?  CAN'T SOMEONE PLEASE BURN SOME SH*T DOWN?

They handed out junior fire fighter hats as we made our exit.  Big E took his hat and popped it on his sweaty head.

I'M SURE I'LL BE SEEING YOU SOON WHEN I COME BACK TO VOTE.

Yes, we vote here and both Mr. Yoy and I take Big E with us as we want him to get pumped up about his civic duty.

The fire fighter laughed.  I laughed.  It was funny.  I made some witty joke about voter fraud.

I TELL MY DAD WHO TO VOTE FOR!  I'M IN CHARGE IN OUR HOUSE.

Then I really chuckled.  And immediately regretted the voter fraud joke. 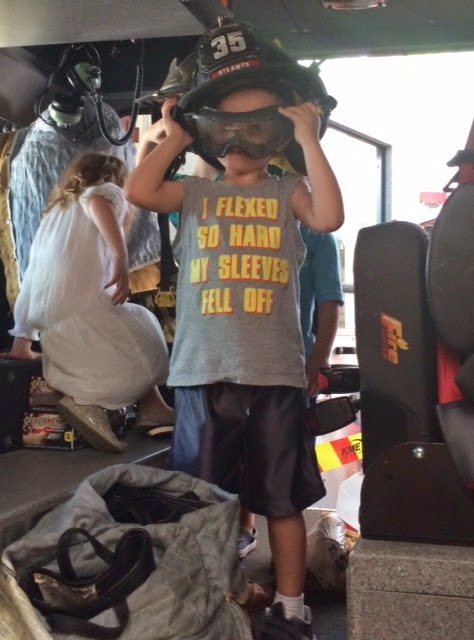