June 18, 2014
The frequency of my blog posts has decreased over the past year.  I have heard the rumblings from some of my disgruntled fans.

This afternoon, as I ran a few errands with both Yoys in tow, a light bulb went off.  Last August was the first time both of my children were in school full-time, allowing me to go places in public alone.  This significantly cut down on blog worthy stories as I wasn't constantly running out of Costco, Publix, or the mall in an embarrassed hurry.

Today was not one of those days.  Today was a classic sh*t show which I will now break down into two parts.  Because so much stuff happened in a span of 60 minutes.

I took Poodle Yoy to the Petsmart groomers this morning to get her hair done.  I had Little E with me and he's happy as long as we swing by all the animals to say hello.  We were in and out in ten minutes.  I prayed that the dog would be ready by 12:30 so I could swing back and grab her before I had to pick Big E up from camp.  But, alas, it was not meant to be.

I picked Big E up around 12:45 and headed back up towards the groomers in the hope she'd be done by the time we arrived.  Nope.  This shopping center has many stores that I can kill some serious time in.  But with both Yoysers?  It's not as appealing.

I decided to park the car in the middle and walk to one end where Dollar Tree is located.  It was a temperate 93 degrees outside, so aside from erupting into flames, everyone was in super high spirits. Absolutely no whining.  I swear.

Once we made it to DT, the boys spent thirty minutes picking out activity books to take on our long-a** flight to Sacramento in a week.  Little E also grabbed some lame ceramic train model with paint.  For a dollar, I was not going to argue about this not going on the airplane.  I was too hot to care.

At the checkout we waited in line FOREVER.  I feel like I celebrated my 39th, 40th, and 41st birthdays.  We finally made it through the line.  I was so ready to evacuate this place after my kids had performed an impromptu July 4th parade with tiny American flags that they swung into everyone they could while we waited.

Except Little E was still clutching the ceramic train model.  Sh*t. Did I pay for that?  I scanned my receipt.  NOPE!

I had to get back in line and wait AGAIN.  He was not leaving the store without it and I wasn't about to get busted for shoplifting a $1 train.

The groomers had still not called, but I was surrendering.  We began the long trek to the other end of the shopping center.  I had my giant purse, and plastic bag full of 15 lbs of learning books, and one Little E barely hoisted on my hip.

I could smell my deodorant working overtime.  Sweat dripped down my back. Little E cried.  Big E whined.  I wanted to cry out.

But, I didn't.  Instead, I counted the steps until we re-entered the air conditioned haven of Petsmart.

Once we arrived in Petsmart, we began another tour of the fish, rats, birds, cats, and doggie daycare.  I don't know why I ever bother with Zoo Atlanta.  The boys are perfectly content in here with the air conditioning.

Finally, my phone rang.  Poodle Yoy was ready.  We raced over to the grooming salon, grabbed the dog and headed to check out.

On the way to pay, the boys began to fight over who got to hold the dog's leash. It was a death match set in the doggie toy aisle.  I was OVER. IT.  I grabbed her leash and strode to checkout, assuming my offspring would follow.

Little E began wailing that he wanted to hold the leash.  Big E wandered off to look at lizards.  Even though I asked him to stay close by.

A woman was waiting by the check out asking an employee about a product.  On the other end of her leash was a pit bull.  I'm not saying all pit bulls are toddler-face-eating-monsters, I'm just saying I'm definitely wary of them.

Little E was uncomfortably close to this dog.  Poodle Yoy was wrapping her leash around me.

MY DOG DOES NOT LIKE LITTLE DOGS.  SHE MAY TRY AND BITE HER.

This information was just too much for me to process.

I pulled the leash so that Poodle Yoy would stay close.  Except she slipped herself out of her collar and began prancing around the pit bull.  So, maybe this is how it all ends?  Not how I expected, but at this point, I can't handle anymore.

I snap back into reality and grab Poodle Yoy and re-collar her.  I'm trying to pay while keeping my children and my geriatric, prancing dog from being mauled at the check out line.

I wanted to say something witty to the lady.

IF YOUR DOG IS SUCH AN AGGRESSIVE ANIMAL, MAYBE SHE DOESN'T GET TO GO SHOPPING WITH YOU AT PETSMART, WHERE THERE WILL MOST LIKELY BE OTHER DOGS.  NEXT TIME, TAKE HER TO SAKS.

But I didn't.  But I did place a request with the cashier.

Hey, we are in Georgia and now you can bring guns ANYWHERE!

As I decompressed in the safety of my car, I reflected on the past hour and remembered why I don't run errands with my kids. 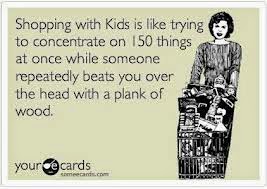