February 23, 2015
This story is about a month old, but I've finally been able to talk about it and not want to vomit.

Mr. Yoy and I have been trying a new discipline technique with Big E.  He is a very strong-willed child who never seems to be affected by consequences.  He has trademarked the term "SO WHAT?!"

Part of our new, more effective, parenting technique is to disengage him when he starts arguing about something that we've already discussed.

Little E and I arrived first and secured a table.  I watched as Mr. Yoy entered the restaurant and waved him down from the back booth.

IS HE BEHIND ME?

Big E had decided that he was NOT going to eat at Ted's.  Instead of arguing over the restaurant, Mr. Yoy just walked in.  Usually, he'll give us some lip, but he always follows like a deflated balloon.

Not that night.  Mr. Yoy immediately ran back outside and Big E was gone.  He had vaporized.

A rush of panic flooded my body.  I grabbed Little E and began escorting him out of the restaurant.  I had to notify mall security, the police, the president of the USA.  Anyone I could.

It was a very busy Sunday evening at the mall.  Next to Ted's was Cheesecake Factory, PF Chang's, and around the corner, Maggiano's.  The restaurants were all packed.  Big E could be anywhere.

My phone rang.  I grabbed it hoping to see Mr. Yoy's number telling me he had found our runaway.

It was a random number.

My panic was replaced with relief.  After endlessly thanking this kind lady, I called Mr. Yoy and had him head that way to retrieve Big E.

THAT is what Big E said when Mr. Yoy walked up to him.  He was not at all frightened or concerned that instead of a nice lady, a creepy, child-molesting perv could have found him first.  He just didn't want to eat at Ted's so he was looking for a better choice for himself.  No big deal, right?  I mean he is an old six.  And he has three dirty pennies in his back pocket.

For the record, Big E had JUST memorized my phone number after my mom told him a story about my cousin getting lost at Disney World.  It blew his mind and he immediately committed my number to memory.

Which is great, because up until then, he thought my number was 272, also the station for Disney Junior. 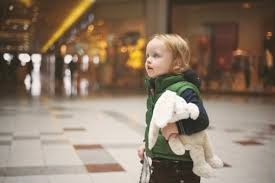