After tormenting me for days with his tooth, Big E finally wiggled that sucker out with minimal blood and gore.  Thank goodness!

The relief was temporary as then I remembered the next part in this process: the tooth fairy.

I googled the going rate for the tooth fairy these days, because I am a 90 year old trapped in a late 30s body.  And guess what?!  It's well over $3. Per tooth.

First, let me thank the good lord that he is not a shark, because this $3+ per tooth nonsense would get expensive. Fast. If I'm forced to choose between funding this tooth fairy thing or new curtains in the house, the curtains will win every damn time. Sorry.

Second, I'd like to thank Greece for its inability to keep itself from defaulting on loans and causing a massive tremor in the world's financial markets, including our own.  Things here are shaky, folks. That's why I've deemed fifty cents to be an appropriate (and fiscally conservative) tooth fairy amount.  He's not in school right now and has no frame of reference.  Things may change once he starts comparing notes with the other first graders and finds out his mom is a scrooge. But for now, fifty cents it is.

Now that the bounty has been decided, I have to work on the logistics of the tooth swap. I really want this to be magical for him. Mostly because we don't do Santa and the Elijah thing is sort of creepy.  He doesn't bring gifts, he just drinks all your wine. Essentially, he's me.

The tooth fairy will give him a sense of magic.  That feeling I had when I would wake up and reach under my pillow and feel the cold metal quarters my folks, ahem, I mean the tooth fairy had left for me. I can still feel the excitement!

This operation must be seamless.  There are a few complications.  Their bedroom door is mad thirsty for some WD-40 and when I open it, it sounds like I'm opening up a haunted house. What if this wakes him up as I creep in? What if Little E, who shares a room with Big E, wakes up and sees me? What if I get the giggles, which I ALWAYS do, at inappropriate moments? What if I can't find the flippin' tooth and I stand there for hours running my hand underneath Big E's head? What if I straight up forget and then Big E wakes up in the morning to his abandoned tooth?

I'm getting heart palpitations just thinking about it.  I have the tooth fairy sweats! I was Mr. Yoy was here. He's so much cooler under pressure.

I'll report back in the am. Wish me luck! 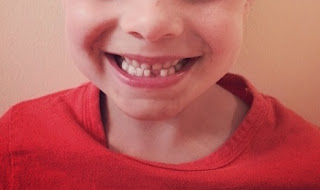