Snakes On My Driveway

September 29, 2015
Instead of therapy and violence, I'm going to express my feelings in a healthy way and write them out of me.  Lucky for you, you have found your way to this page. Prepare to be enlightened.

For those of you who know me in real life, you are blessed.  You know that I have a pretty even-keeled personality.  My patience runs deep and it takes some big-time bullsh*t to really get my blood boiling.

And my blood is boiling.  You see, Mr. Yoy and I just dropped a pretty penny on new construction in an area that doesn't come cheap.

Our builder, Ashton Woods, is "America's Trusted Builder".  That's their motto.  It's on everything.  I'm pretty sure they didn't do a survey around my neighborhood, because trust isn't the first word the Yoys and the majority of our neighbors would use to describe their dealings with Ashton Woods.

Part of the process of moving into a new build, is having your one month, six month, and eleven month walk-thru with the builder to fix non-cosmetic issues. We are knee deep in having things fixed for our one month punch-list.

Most things have been completed without incident.  Until now. 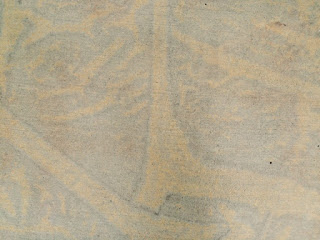 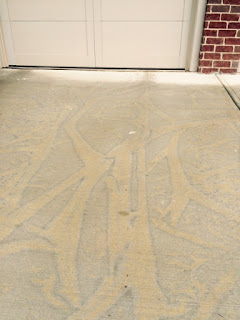 What is this you ask?  Is it modern art?  It sure looks visually interesting, doesn't it?  It's our driveway.  I like to call it "Snakes On My Driveway."

Mr. Yoy called this to the attention of our assigned builder, Builder B shortly before closing. Builder B had a death in the family, and he was rushing out of town, but he assured us that he would have our driveway acid washed and it would be remediated by the time we returned with our keys in hand.

So we trusted Builder B.  Because we are decent people and we expect other people to return the favor.

But it didn't get done.  Instead it was power washed a few weeks ago.

So...this isn't dirt.  It rained shortly after the concrete was poured and they placed a tarp over wet cement to achieve this designer decorative pattern.  Our driveway dried with a tarp laying on it.

A few thoughts...First, let me introduce you to something called The Weather Channel.  Now I know it isn't 100% accurate, but if there is a chance of significant rain, maybe you hold off a day.  Or two.

When I spoke with the customer care person as we walked through my home last week, I pointed out the driveway and he told me that this was purely cosmetic and not covered under the warranty.

I told him this was an unacceptable answer.  I was very calm and polite in my dealings with him. I operate under the theory that you catch more flies with honey.

He pushed back again on fixing the driveway.  He maintained it would POSSIBLY fade out over the years.  Cool. So I warned him.

LOOK. MY HUSBAND IS CRAZY.  AND HE'S AN ATTORNEY.  THIS WILL NOT WORK FOR HIM. YOU DO NOT WANT TO PULL HIM INTO THIS.

The customer service guy told me that Mr. Yoy would have to escalate it.  I silently said a prayer for this poor soul, who did not realize the horror house he just walked into.

As of this morning, Mr. Yoy has had two ugly phone calls with this man.  The latter caused Mr. Yoy to black out in anger and his paralegal had to summarize the phone call as she heard every vulgar word from 30 feet away.

Mr. Yoy is loud, yet pretty logical.  He usually doesn't resort to yelling, either.

But the Ashton Woods business model of rarely accepting responsibility for shoddy work in the hopes that their customers wear down and give up, does not work with the Yoys.  Mr. Yoy asked me out hundreds of times before I agreed to go to a movie with him.  He has mastered persistence.

Our story is not unique.  Each of my neighbors has some story that makes you want to smash your head through the scratched-up window they installed in your bedroom.

WE'RE SO SORRY YOUR HONDA ACCORD DOESN'T FIT INTO YOUR GARAGE BECAUSE OF A DESIGN FLAW.  MAYBE YOU SHOULD SWITCH IT OUT WITH A SMART CAR. - Just a sampling of the builder madness.

So, I'm open to creating a new, more appropriate slogan for Ashton Woods.

In the meantime, I feel better for just getting this out into the universe.