Why Moms Drink Wine at 9 AM.

September 05, 2015
Friday morning came fast and early for the Yoys.

My cousins arrived Thursday night with their kids, and this sent Big E into a tizzy.  He was unable to settle down until after eleven.  Thank goodness Little E fell asleep before their arrival and slept through all the excitement.

I was able to get the Yoys dressed for school ahead of our normal sprinting-to-the-bus-stop timeline.  Big E was determined to accidentally wake up his cousins so he could play with him.  He was singing in the hallway some made up bulls*t song about farts and umbrellas.

I couldn't SHHHHHH and threaten him enough.  Only later did I learn that all my SHHHHHHHH was very audible through the bedroom walls.

As I herded the boys into the bathroom to brush their teeth, I circled back into Big E's bedroom to turn off his light.  And that's when I saw Poodle Yoy. Squatting. Pooping on his bedroom floor.

I screamed at her.  I checked the floor and I had interrupted her before she had done her dirty business.  Phew.  Crisis averted.

I re-entered Little E's bathroom to see if he had finished brushing his teeth.  Oh he had.  He was already off his step stool.  He stepped down into Poodle Yoy's hot steamer.  There was a trail of turds through my freshly tiled home.

Little E started crying when he realized his shoe was coated in poop.  I sprang into action.  Pulled off his shoe.  Grabbed handfuls of toilet paper and began picking up the poop and flushing it down the toilet.

I ran into the laundry room to grab some towels so I could clean the floor.  In the hallway, I encountered another line of turd droppings.  She was pulling a Hansel and Gretel and leaving a trail of her sh*t around my house in case she got lost.

I whispered a thousand dirty words as I picked up more poop.  The boys were downstairs clamoring for breakfast.  My guests were trying to sleep.  Mr. Yoy was snoozing away in our eleven pillow dream bed.

IS EVERYTHING ALL RIGHT OUT THERE?

Finally, Mr. Yoy awoke from his slumber to his cussing wife.  He was alarmed, but not enough to get up and help me.

I ran back into Little E's bathroom to start scrubbing the tile.

Except I saw this. 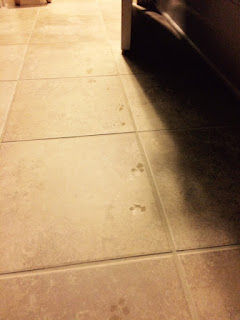 Yep. Those are pee prints.  Because after she was done soiling up every room on the second floor, she unloaded on the bathmat, except missed and now there was a lake in the middle of the floor.  She made sure to step in it before prancing innocently out the door.

Again, I grabbed another towel, sopped up the urine and hurled the bath mat into the wash.

Time was up.  I had to feed the Yoys and get them to the bus.

I would have to deal with this later.

I ran downstairs. Sweating. But we made it. And that's all that counts.