October 06, 2015
We have just wrapped up the first quarter of school.

Big E has started receiving homework, so yesterday I had both boys sit down to work on their assignments before the neighborhood pack of children assembled for the afternoon and any sort of productivity would evaporate.

Little E has had homework for awhile, and no matter what the task, it always ends with him on the floor sobbing WHY ME?

I asked Little E to start on his homework.  He sat there at the table and had the nerve to sass mouth me.  That's what we call it.  I especially like when my kids tell me to stop sass mouthing them.  It's a one-way street boys.

I told Little E to go to timeout at the bottom of the stairs.  He stared me down. I counted to three.  He continued to stare me down. Who is this person?  Where did sweet, obedient Little E go?

I walked towards the table to ESCORT Little E to timeout.  He got up and ran around the back side of the table.  He had his head turned towards me as he sprinted towards the stairs.

He ran full speed into this support column in the middle of our house.  And then collapsed on the floor. 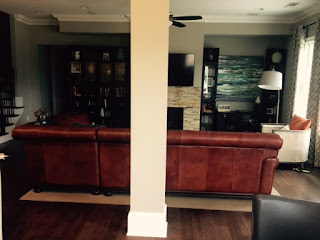 A few words on the column.  I wish it wasn't there.  But I've watched enough HGTV to know that unless we wanted to spend $$$$$ on a steel beam in the ceiling, this column would remain.

And I knew it was just a matter of time before this column became a crime scene.  And two months in, we had succeeded.

Little E was hysterical.  He had knocked the wind out of himself.  I think "knock" is too gentle of a word.  His chest meet the column right at the 90 degree angle. He was gasping for air.

I shouted to my kids.  I forgot they were not doctors...yet.

Big E helped amplify the situation.  He grabbed my iPhone and set the ringer to sound like a fire alarm was going off.  Because what I truly needed at that moment, was a soundtrack.

I asked Little E to take a few deep breaths.  I inspected his limbs and body.  He had a red line down his chest.

I hugged him and calmed him down. 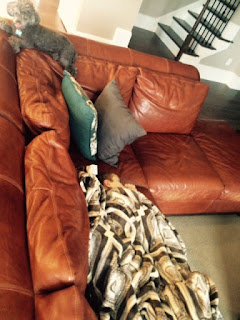 He grabbed the fuzzy blanket and cocooned himself on the couch as he regained the ability to breathe.

And within minutes, he was ready to do his homework.