November 11, 2015
On Tuesday, Big E will turn in his first major school project, complete with character dress-up, tri-fold foam board, and presentation to parents.

The assignment was to choose a famous artist and then compare and contrast the artist to Leonardo DaVinci. (not DiCaprio)

Big E chose El Greco. My art history study was limited to one semester in high school.  I'm ashamed to admit I know very little. Undoubtedly,  I learned just as much as Big E as I read through the El Greco book he brought home from the library.

El Greco is most famous for his paintings of Jesus Christ.  I found this to be an odd choice for a Jewish boy.

BIG E, WHY DID YOU CHOOSE EL GRECO?

Maybe it was his haunting, larger than life figures.  Or the way he up-lit his subjects.  He must have been visually drawn to this guy's work.

THERE IS A COMIC STRIP INSIDE THE BOOK, MOM.  I LIKE COMICS!

So cool. You made your decision based on some amateur comic inside a children's art history book.

I ran to Michael's yesterday and purchased the foam board ($17!) and some new markers to motivate him to get started on this project that was assigned weeks ago. 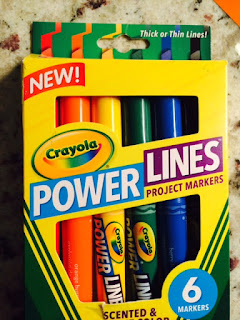 I bought these suckers thinking the thick lines would be good for writing on a giant foam board.  I didn't see the part about them being scented. The first 20 minutes Big E spent working on his project was him sniffing markers and getting high.  He even shared with Little E.  I could almost see them in some nasty AEPi den in 15 years.

After some judgment altering inhaling, Big E picked the following two pieces of art he wanted me to photocopy to include on his board. 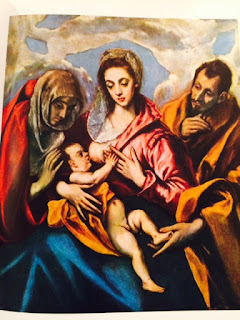 As a former nursing mother, this is a beautiful painting.  But out of the HUNDREDS of paintings, THIS is the one that moved him most.  But not to be outdone, he also chose this one: 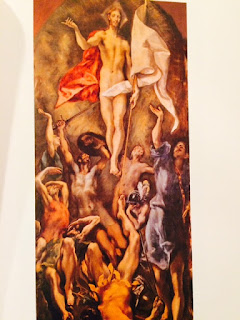 The resurrection of Jesus Christ. Just to recap, my Jewish son chose this painting.  Not the one of the crusty noble man smirking.  This one.

The irony is lost on Big E, as he doesn't know who Jesus is.  I, on the other hand, have had a good chuckle. 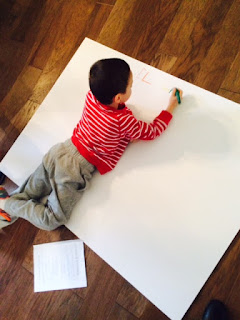 Coming down off his marker high.