November 18, 2015
Yesterday, after at least three months of our Comcast cable laying in the gutter of our street, where countless cement trucks, cranes, and everyday traffic drove over the fraying orange cable, Comcast finally buried that sucker.  They've already been out to replace it once, as our cable was acting up due to damage.  I asked numerous times for it to be buried.  Yesterday was the day.

Things were getting done. I was happy. Until I tried to sneak in a little HGTV before my kids came home from school. And it wasn't working. And neither was my internet. And my home phone (not super important).  And the Comcast guy had vanished like a ghost.

The cable may be out of sight, but it was no longer hooked up to our home.

The Yoys came home and we were busy with homework and life and I wasn't able to call Comcast until after the kids went to sleep.

The customer service rep kindly told me that they'd send a technician out on Monday.

Panic sirens began flashing in my head. Six days without television? Six days I'll have to parent my own offspring? And they'll be on Thanksgiving break? Is this some sort of joke?

I begged the guy to find me an earlier appointment. He kindly moved me up to Sunday. Whew, that was close. (Sarcasm)

I was too tired to argue and he assured me if any appointments opened up in our area, they'd call me ASAP.

I hung up the phone and panicked.

NOW WHAT DO I DO?

So I read a book.  It was weird, but what choice did I have?

Fast forward to today.  I let the kids in on the bad news as soon as they awoke. I needed to set their expectations.  Big E was devastated that he would have no screen time on his birthday (tomorrow). First, we canceled his party. Now no TV. His life was not worth living.

We'd gone a full 24 hours without TV and internet. I decided to take Poodle Yoy for a walk with the break in the rain. As we rounded the corner for home, there it was.

A shiny, gleaming beacon of hope.

I broke into a sprint in my knee-high Stuart Wetizmans and sweater dress.  This was for serious.  Life or death. I ran so fast I ripped Poodle Yoy's collar right off her freshly coiffed head. I looked back at her.  She was on her own, show-dog prancing freely down the middle of our street.

ARE YOU THE COMCAST GUY?

It seems to weird to ask given the truck, but there are like 100 workers in here on any given day.

He confirmed and I spilled the beans.  About the disruption in service and the call last night and how I have small children that NEED to watch Paw Patrol. Please. Have mercy on my family. I may have teared up for show. 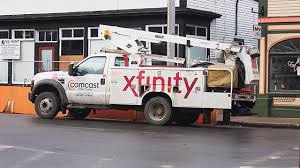 Can you hear the angels singing?