November 12, 2015
Last Saturday, we hosted a bunch of friends for the UF vs. Vandy Game (dubbed by Mr. Yoy as the battle of the only two SEC schools the Yoys are allowed to attend).

Now that we have edged into our mid-thirties (ahem), these parties also include lots of children. We had ten little ones roaming around the house, including the Yoys.

I had instructed Big E to be my eyes and ears.  If he saw something that shouldn't be happening (i.e. purchasing movies via Comcast - yes, that happened), please alert me.

One of my main rules is no food out of the kitchen.  But this was a party and I was hitting the Riesling, so I may not have been as sharp as usual.

At some point, Big E snuck an apple up to the playroom. I guess I can't be too upset that he is sneaking fruit, but rules are rules.

What happened next remains fuzzy for all involved, at least for my kids who proclaim complete innocence.

What I found, after the game ended, was a half eaten apple lazily propped up against my formerly white baseboards in my laundry room.  On a totally different floor from where Big E claimed to have gotten tired of chewing and left the half-gnawed apple perched on a couch pillow in the playroom.

And only because I've watched an insane amount of Law & Order and CSI, I was immediately drawn to the splatter patterns of the apple juice.  All I needed was some of that mysterious spray bottle liquid and a black light. 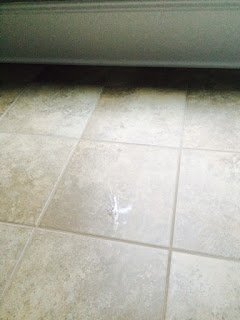 To the naked eye, the initial apple impact was by the dryer and a trail of sticky apple juice made its way to the wall where the sad, browning apple was found.

The truth is out there. Although I fear I'll never know it.