This year brought the Yoys their first ever Easter Egg Hunt.  I gave them a pep talk beforehand.  Yes, we are Jewish. Yes, you can still hunt for eggs and eat delicious peeps.  Yes, you can wear bow-ties and pastels and no one will be the wiser.  We lit the Shabbat candles and headed out the door.

And the boys had such a great time. 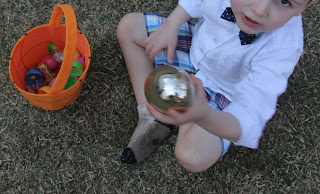 Until the end.  When it was brought to my attention that Big E had taken another little boy's basket of eggs, snuck out of sight, and emptied its contents right into his basket.

I was angry with him.  I was embarrassed that he committed the greatest sin on the Easter Egg Hunt circuit during our first time to the rodeo.  We would be labeled as the egg-stealing Yoysers and banned from all future egg hunts in some super secret Easter book. 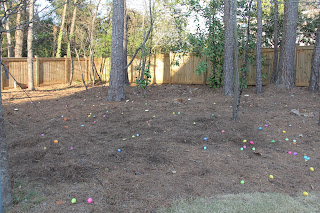 Scene of the Crime

At home, Mr. Yoy and I sat Big E down and spoke to him about it.  He vehemently denied any participation in the theft.  He blamed a set of younger twins. Big E does this weird thing with his mouth when he is lying to me and I hope to the heavens that he NEVER outgrows this.  I knew he was lying.  I was just waiting for him to cave.  After about ten minutes of being cross examined by Mr. Yoy, Big E finally fessed up.

BUT I JUST LOVE CANDY!

We talked about why stealing is wrong. The following day, he wrote an apology note to his friend and delivered it with a bunch of the candy he had pilfered.

I'm hopeful that he learned a lesson.

I'm hopeful that we get invited back next year.

I'm hopeful that the Peeps are 50% off when I hit up Publix tomorrow. 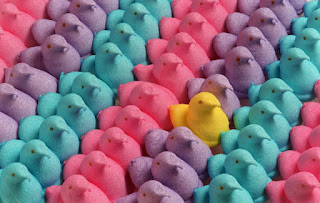