Another Day, Another Disaster

April 01, 2012
I tried out a new playground with a friend and her two kids this morning.

Between the two of us, there were four little kids which equates to mass chaos.

Fortunately for us, the park was sparsely attended.  Big E and his friend, Lady E, were navigating the big wooden structure we coined "the castle".  They were having a blast.

Little E had also found a fun little play area for himself that was close to the ground, which I greatly appreciated. I did not have the fear of him falling off the top of the castle pulsing through my veins.

I had everything under control, for once.  I began to relax and enjoy the warm sunshine.

I HAVE TO POOP!

And, back to reality I snapped.  Big E was making a beeline for the van and his mini potty.  I asked my friend to watch Little E.

I had taken two steps towards my car when Lady E also exclaimed her urge to go to the potty.

Now there was trouble.  I doubled back to grab Little E's hand as we were all headed to the car.

Big E was jumping up and down at the van, not helping his cause.

Little E didn't want to leave the playground.  He played dead and collapsed into the wood chips.

There was no point in trying to reason with Little E.  He doesn't really talk.

I threw Little E into his stroller and ran him up to the van.

As I arrived at the door, Big E yelled for me to help him pull down his pants.  If you've heard that commercial for the potty dance, I can attest that Big E was doing it. Majorly.

Just then, Little E decided he wanted out of the stroller, and since I didn't clip him in, in my rush to get Big E to his potty, you can only guess what happened next.

There was Little E, face planted on the sidewalk, screaming bloody murder.

I picked him up and instantly a goose egg popped out of his forehead.  He had blood running down his nose from an earlier cut he had reopened.  I am definitely up for worst mother of the year.  I felt awful.

For a second, I wanted to run away.  But I held it together, barely.  I took a deep breath and told Big E to hold on while I cleaned up his bloody brother.  Little E settled down after a minute of death screams, thank goodness.

I had flashbacks to when Big E jumped out of a train up in Kennesaw.  This time I knew not to take Little E to CHOA, as we are STILL paying off that medical bill.  Plus, his fall was amateur compared to Big E's belly flop off the caboose.

I got everyone cleaned up and calmed down and we even managed to have a picnic lunch and scare away the ice cream truck.

I just don't know if Mr. Yoy will trust me anymore to take the Yoys out alone. 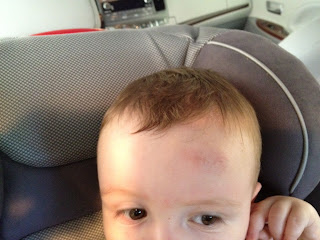 Poor Little E.  I'm definitely on the hook for this one.