April 10, 2012
Yesterday, I was having a rough afternoon.  I was exhausted from the weekend and feeling a tad under the weather.

Not feeling 100% is incompatible with being a mother.  It just won't work, no matter how hard you try.

I powered through their dinner which was served promptly at 5pm.  These kids were going to bed early.

As the Yoys munched away on their dinners, I straightened up the house.

By now, the downstairs resembled a war zone.  Mr. Yoy's Lego pyramids he had built to show how good us Jews were at building them, had since been obliterated into pieces and were strewn about.

I kept repeating these phrases to myself.  I had to make it.

I finally had most of their crap put away.  I know I am so Type A, but I hate coming downstairs in the morning to a disaster.  I just can't handle it.  It has to be neat.  If only for a minute.

I returned to the kitchen area to find that Little E had made it rain green beans.  Like all over the place.  And Poodle Yoy, who is nasty enough to eat sh*t diapers, won't touch them.  I guess she draws the line at green beans.

I took a deep breath and bent over to clean up the green bean graveyard littering my kitchen.

And then I felt it.  Little E's turkey lasagna (I know, it is Passover) covered paws.  He was patting me on the back.

I immediately jumped out of his reach and took off my favorite Target cardigan sweater.

There, like a hand print at Grauman's Chinese Theater, was Little E's print in red sauce on my favorite sweater.

I made the executive decision to penalize Little E thirty minutes for that play.  There ARE rules you know, and wiping nasty hands on my sweater is definitely against them.

I managed to have Little E in bed by six.  Big E followed soon after.  And I finally took a much deserved shower. 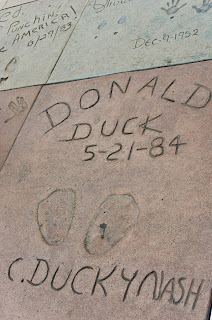 Why did I choose Donald Duck you ask?  Only because I was dead set on naming my brother Donald Duck and I was super pissed at my parents when they decided on another name.  Traitors.
dirty hands Little E