Last Mother's Day, Aunt Yoy and I somehow convinced our husbands to send us to the spa at the Ritz Carlton for the afternoon.  And they did!  And it was marvelous.  Chardonnay.  Trashy mags. Massages.  The holy trinity for Mrs. Yoy.

However could I top last year?

Mother's Day 2014 started strong.  The boys cooperated and we were able to get some amazing family pictures.  We enjoyed the insanely delicious brunch buffet at Local 3.  I took it easy on the sweets and left there not feeling like I had to pull out the one pair of maternity jeans I keep hidden in the back of my closet. Shh. Don't tell.

We headed to the playground where the Yoys and their cousins played/attempted murder for about an hour.  Things began deteriorating, so we headed to the car.

I HAVE TO GO TO THE BATHROOM!

Little E's shrill bathroom alarm went off.  Well, sh*t.  We were nowhere near a toilet.  I looked around to see if anyone was watching and then he dropped his little blue chino shorts.

I HAVE TO GO TO THE BATHROOM, TOO!

So while Little E is going, Big E pulls down his little blue chino shorts mere feet away and began to pee.  Except he felt the need to cross streams with Little E. And because he has terrible aim, he peed on my dress. Awesome.  I half laughed/half cried.  But there was no time for emotion as I smelled something awful.  And it wasn't me.

At first I thought Little E was also pooping, but instead, it was the dog poop he had stepped in.

I took a deep breath.  And walked away.

After my mommy time-out, I stripped Little E of his shoes, socks, and pants.  He had also been peed on.

We made it home where the Yoysers and their cousins played hard for three hours.

They went to bed with no objection, which I greatly appreciated.

Until I came downstairs.  And saw this. 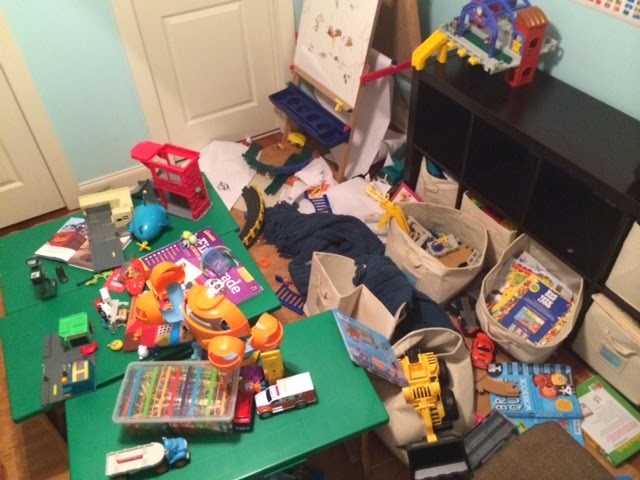 I think they attempted to spell out Happy Mother's Day in toy piles.