May 29, 2014
A few weeks back, Little E acquired his first piggy bank.  In the shape of a train. It combined two of his most favorite things in the world: trains and money.

He happily drops pennies into the slot and shakes his loot.  It is clear, so I can see all the change and a random dollar bill.  According to Little E, he is saving up for the giant swing set on display at Costco.  Dream big, little buddy.

Today is show and share day at school.  Little E was adamant that he take his train piggy bank.  I didn't think it was his best idea as I could see the bottom coming unscrewed and the aftermath of 18 kids jumping on about $3.43 in pennies.  Mayhem.

I redirected him to a magnifying glass.  And that was an acceptable replacement for Little E.

He handed over his piggy bank.

LITTLE E, WHY IS THERE A $20 BILL JAMMED IN THERE?

He nonchalantly mentioned that Big E had gone into my wallet and taken it.

Sweet.  My five year old is already stealing $20s from me.  I didn't think that happened until way later.

I guess it's time to lock up my purse.  And maybe also the peanut butter. 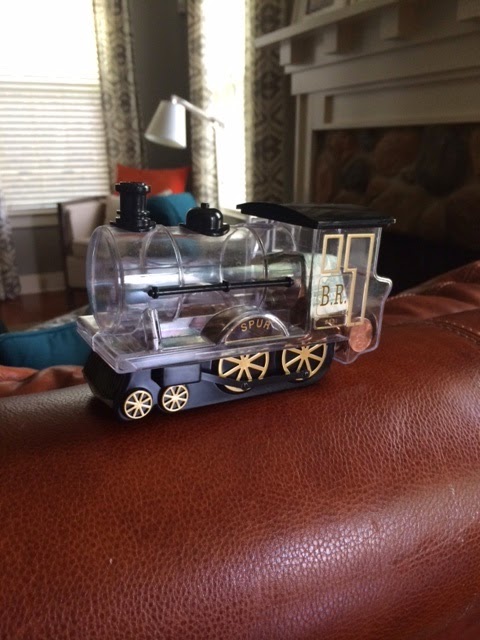