Little E: So He Had A Bad Day

May 18, 2014
Yesterday's theme song for Little E was the American Idol anthem from a million seasons back, Bad Day by Daniel Powter.

The morning started off strong.  Sweet Potato muffins and a smoothie.  We played outside and Little E even got a cool new Melissa and Doug toy.  He went on and on about how he was going to take it on the plane with him to Tahoe.

I dropped Mr. Yoy off at his office with the intention of picking him up before we headed to Chastain for the Willie Nelson concert and the Yoys and I headed home.  Cue ominous music now.

The boys played nicely for about an hour.  I even got a workout in.

Then they began to get wild.  I suggested multiple times to go outside.  We have bubbles!  We have chalk!  What more could a little boy want?

My idea was enthusiastically panned and instead the boys grabbed their toy binoculars, compass, and telescope and went on an "adventure".  I think this included exploring the laundry room, because let's face it, this kids know zero when it comes to folding their sh*t.

I watched in amusement as they ran back and forth amongst the upstairs room on their adventure.  I wish I had their creativity.  My serene moment was interrupted with a smack and a high shrill scream.  I ran into Little E's bedroom.

Blood.  Pouring from both nostrils.

LITTLE E SMASHED HIS FACE INTO THE BROWN PART OF HIS BED!  (that would be the soft leathery part, by the way!)

I wasn't buying it.  So I asked Little E what happened.

BIG E HIT ME IN THE FACE WITH THE BINOCULARS.

So there was the truth.  I sent Big E to his bedroom while I brought Little E to the bathroom to clean him up.  His nose stopped bleeding and when he began to smash his face into the ice pack, I knew that his nose was fine.

Big E took this opportunity to shout medical advice from his bedroom.

I sat them down and told them to put a kabash on the rough housing for the day.

And because no one ever listens to their mother, it ramped up again about thirty minutes later.

I was sitting in the chair in my bedroom, putting on my shoes for the concert, when Little E came sprinting into my room with Big E hot on his tail.

Little E's Fred Flintstone feed just couldn't keep up with the demanding pace and he tripped and did a header into the footboard of our bed.  And I had a front row seat.

The sound.  The screams.  It will haunt me until my last days.

I ran over and picked Little E up. 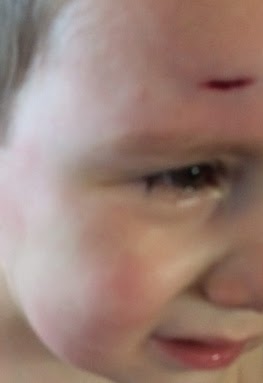 He had a gash.  I'm not a professional, but this looked more serious than an average scrape.  I felt like I could see into his brain.

Once my babysitter arrived, I grabbed Little E, picked up Mr. Yoy and headed to urgent care.  I recounted the story of Little E's bad day to the doctor and nurses. I was worried they'd think I was some raging animal and had done this to my baby.  This was the work of an older brother. 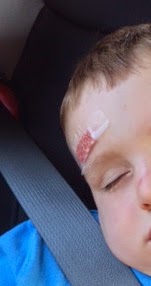 The doctor decided against stitches (thank goodness!) and opted to glue him back together.  Like Humpty Dumpty. 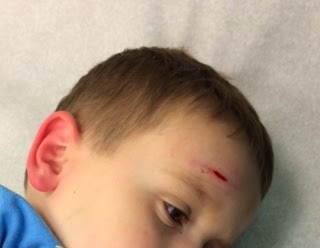 Little E is still sleeping so I haven't been able to assess the wound this morning.

I'm hoping for a much better and less eventful day.