October 03, 2014
Wednesday evening found us on the banks of the Chattahoochee.

We were meeting some of our friends to participate in Tashlikh in conjunction with the Jewish New Year.

In summary, you throw bread crumbs into the water to cast off your sins from the last year and start this year anew.

As we drove to the river I laid the ground rules for the Yoys.  Really there was just one rule:

WE ARE THROWING BREAD CRUMBS INTO THE CHATTAHOOCHEE, NOT OUR BODIES.

There are many things in the river that you don't want to come into contact with:

Initially, the boys and their buddies obeyed.

They threw rocks and sticks into the river.  It was very A River Runs Through It.

The sun was setting and the light glistening off the river waters was lovely.  I was amazed at the beauty we found in the middle of the bustling city.

Fingers and toes began to creep closer to the water.  A shoe. Then another shoe. Then shoes were off and they were wading in the cold, dark, mysterious water. Then Little E climbed a slippery stone and busted a** into the river.  He was drenched from the waist down.  And with that, it was over.

The kids began to wade out into the river.  All eleven of them.  They laughed and splashed and had a grand old time.  Little E submerged himself.  When did this transform into a Baptism?

All while their Jewish mothers stood along the shore.  Shaking their heads in amazement.  Fretting.  Googling Flesh-Eating Bacteria. Because that's what we do.

We were able to lure the kids back to shore to say the prayer and toss the bread into the water.  Little E chowed down on his slice of bread.  According to him, his behavior was so exemplary over the past year, he was exempt from Tashlikh.

Happy New Year to my friends and family! 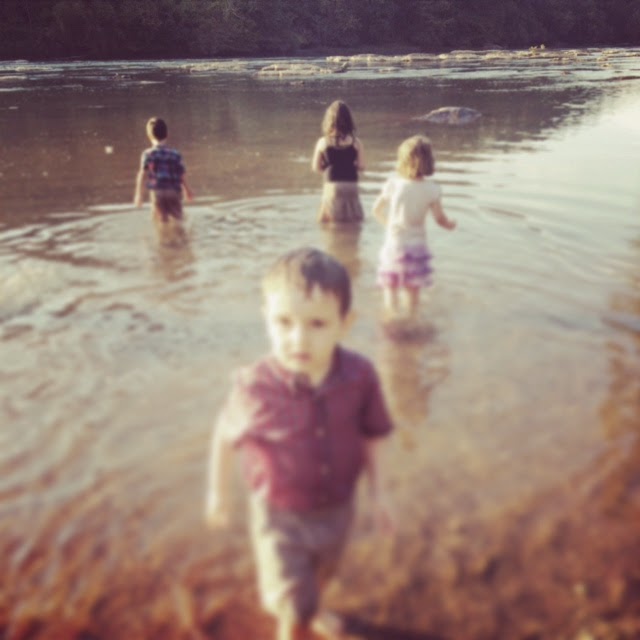