No Child Left Behind

May 21, 2015
Making it to the morning bus stop is a perfectly orchestrated process.

There are so many moving pieces.

Will the bus be five minutes early today?

Will the bus be twenty minutes late today?

Will the Yoys refuse to leave their warm beds?

Will I sleep through my alarm?

Will Little E have a bathroom emergency?

It truly is a miracle that they make it on the bus most mornings.  So what if they are inhaling their breakfasts as they sprint down hill to the stop?

We HAVE missed the bus one or twice.  But only because the bus showed up way earlier than normal.  We didn't even realize we had missed it until I called a friend later down the line to see if her son had been picked up.

This morning we took a little longer to get ready.  Big E had to get dressed up in his graduation outfit.  I was busy filing out a thank you note for the bus driver, ironically.

We were heading out the door when our door bell rang.  It was my neighbor telling us the bus was there.  I yelled for the boys to bust a move.

As we ran out the front door screaming like we were on fire, our bus drove off.

I wanted to yell F.  Because I only had like ten million things to do before I headed to school for graduation.  Creeping down Bolton Road for thirty minutes was not in my plan.

I threw the Yoys in my car and took off.  I was going to chase down this bus if it was the last thing I ever did.

I peeled out of our neighborhood and made the light onto Bolton.  The bus was only four cars ahead of me.  My kids commented that I was driving like a mad woman.

NO COMMENTS FROM THE PEANUT GALLERY!

My friends were surprised to 1) see me at their stop and 2) not wearing pajamas.

The bus driver was even more surprised to see the Yoys.

Big E handed the driver her thank you card, but not before laying on the Jewish guilt.

WHY DID YOU LEAVE US? 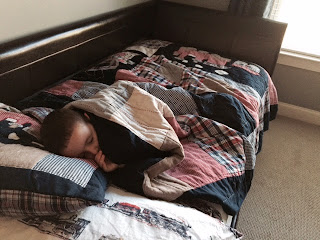