May 20, 2015
Thirty nine children stood up when their names were called, walked up on stage, received their Pre-K diploma, and shook the principal's hand.

One child did not.

And I'm sure you already know that the one child was my very own, Little E.

Don't get me wrong, he was super amped about all the attention he was receiving.  He just decided to add an impromptu victory lap to the rites of graduation.

Little E stood up when his name was called.  He smiled his giant, cheesy grin, and made a bee-line towards Mr. Yoy and I as we sat frozen, mortified in the audience.  Oh lord, what was about to transpire?

He hugged Mr. Yoy.  He hugged me.  Then he left our row of seats and made his way to the side of the gymnasium where his brother was "videoing" the graduation.  I put video in quotes because for the second year in a row, I brought an uncharged, hanging by a thread of battery, video camera to Pre-K graduation. Luckily, Big E didn't know that and he was completely preoccupied with his filming duties.

But back to my story.

Little E hugged the hell out of Big E to which the audience erupted in a round of:

Then finally, after what seemed like hours, Little E made his way up on stage to receive his diploma.

Mr. Yoy and I laughed so hard we had tears in our eyes.

Or at least that's MY story. 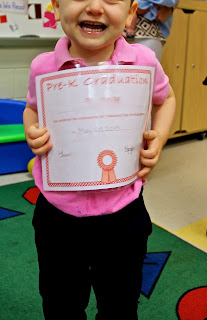 So proud of himself!
graduation Little E mommy blog pre-k