Out of all of the traits I want my kids to have it is most important to me that they are good people.  It is something I struggle with on a daily basis.

Little E has organically picked this up.  He shares with Big E, even though that is clearly a one-way street. He is sweet to his friends and he is ridiculously sweet to me.

MOMMY, YOU ARE SO PRETTY.

MOMMY, YOU SMELL SO GOOD.

MOMMY, YOU ARE REALLY TALL.

Big E has a ways to go.  Sometimes, he'll surprise me with excellent manners or his ability to make the new kid in class feel welcome.  But for the most part, he's the center of the universe.  And not just his, it is his assumption he is the center of EVERYONE'S universe.

The last week of school brought class awards.  I wasn't sure of the structure of these awards, but as it turns out, everyone received an award and they were candy-themed.

WHOPPER: THE CHILD WHO TOLD THE BEST STORIES.

SNICKERS: THE CHILD WHO TOLD THE BEST JOKES.

SMARTIES: THE CHILD WHO EXCELLED IN THEIR STUDIES.

When I asked Big E if he thought he would be receiving an award, he confidently announced he would receive the award for the smartest kid.

It sounds completely obnoxious, I know, but he said it with such confidence and sincerity that I wasn't sure how to respond.

When it came time to distribute the awards his teachers led into each award with a little background.

I blacked out because I looked down at Big E and he had raised his hand.  He was claiming his award before his name had even been announced.  I gently (or not so gently ripped his arm off) guided his arm back down.  I gave him the mommy evil eye which translates to CUT THAT SH*T OUT NOW.

He had a huge smile on his face, but before he went up front he turned to me and loudly whispered:

Maybe it was the fact there were about 65 people in a room meant to hold 30, but I was SWEAT-ING. Why can't my son be humble?  How can I teach this to him?  I don't think I'm walking around telling everyone how smart I am? Am I? Smack me if I am.

I'm hoping this is something that comes with maturity.  I want him to be confident, I think that is an excellent trait to have and will serve him well when it comes time to dealing with peer pressure, but I also want him to kind. To be humble. Sigh. 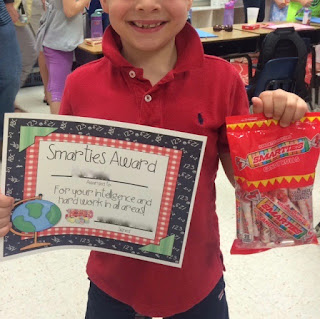 He also pops his collar when he wears polo shirts.  Part of me cringes, but my secret 80s loving self ADORES IT.