I went Medieval. The Yoys did not.

June 17, 2016
The last day of their three weeks at HM camp was coming to a close.  After a rocky start, the boys pledged their allegiance to this camp.  They wanted to go back for another session, not in the cards, but I promised they could go again in 2017.  I was beyond relieved.  I took a gamble with this $$$$$, all-day for three weeks, camp. I gambled and I won (this time). Check back with me in a few weeks when I return from Vegas.

Today was Medieval themed day. They asked the campers to dress as kings, queens, knights, or even dragons. The Yoys loosely interpreted this to mean Halloween in June and pulled out their all time favorite costumes, the cops.  They didn't give a second thought to their wiener costumes, which I love.

I lobbied hard for them to wear their paper crowns from Medieval Times and be done with it.

Black polyester pants (but sort of like capris because they have grown since 2014) and black polyester long-sleeved tops. With velcro ties. And black hats. This was what they wanted to wear to camp today, in the sweltering heat of the waning days of Atlanta's spring.

I explained that they would be profusely sweating and possibly get overheated.

But Mrs. Yoy cannot compete with a whistle and hand cuffs.

I rolled my eyes as they climbed into the patrol car (my Avalon).

We made a quick stop at the drive thru dry cleaners where the elderly gentleman pretended the Yoys were arresting him. HANDS UP!

The boys thought this was HILARIOUS, I wished people would stop encouraging their madness.

At drop-off, Little E conjured up his meanest face and promptly arrested all of the Queens and Kings and Knights working carpool.  They were arrested for following directions.

My phone rang a few hours ago. It was the camp nurse. Little E was in the infirmary complaining of symptoms consistent with overheating. She put him on the phone so I could graciously explain to little man that 1) mommy was right  2) he should change into his spare set of shorts and muscle tee, and 3) if he was feeling better in a couple of minutes, he should rejoin his group.

I don't mean to sound insensitive, but poly doesn't breathe. Everyone should know that, and now he does. 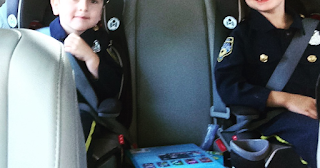