The House of (Foot) Horrors

June 07, 2016
It's been a splintery start to the summer.  On the last day of school, both Yoys had splinters.  Thank the lord my neighbor, Dr. B. was able to tweeze one of them out of Little E while we were at the pool.

Big E is another story.  I've blogged about his legendary splinters in the past.  He refuses to let me anywhere near him.  I have to carry him to bed and then wait until he is passed out so that Mr. Yoy and I can sneak into his room like a pair of Navy Seals and yank it out while he is in dreamland.

Yesterday, we decided to kick things up a notch.

The boys were feverishly working on their new Lego set that Uncle D had bought them during his visit.

The house was completely clean, the boys had showered and were in their jammies, seven loads of laundry were complete, and dinner was on the stove.

Monday, I was supermom.

Until I accidentally dropped the Dill spice bottle.  It was glass.  I scooped it off the counter.  PHEW. It didn't shatter into a thousand pieces.  I almost had to turn in my supermom card.

Big E's buddy knocked on the back door.  He leapt out of his chair to let him in and then he screamed out in pain.

GLASS!  I STEPPED ON GLASS!

I ran over and looked at his foot.  Yep.  There is was. 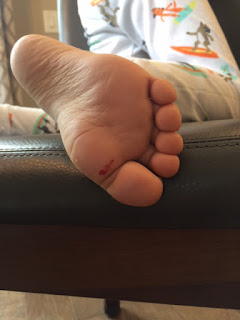 Bigger and more damaging than a splinter.  Blood was dripping from his foot.  I ordered everyone to sit down in chairs until I was able to sweep. I examined the Dill.  A tiny corner piece of the glass container had broken off.

My quiet evening had just been destroyed. I was forced to turn in my supermom card.

Big E was howling.  I tried to get a good look at it.  The glass resembled the dorsal fin of a shark. I told him I'd have to pull the glass out and he freaked.  He was sweating. He swore he was going to vomit.

I called Mr. Yoy to see if he could talk him down.

Big E made me swear that I wouldn't touch his foot until he was asleep. I agreed. 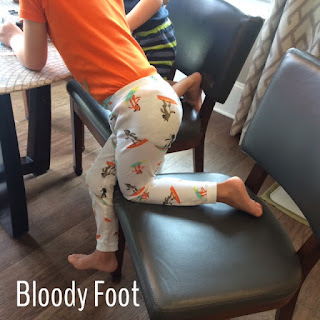 So he recovered pretty well and went back to Lego building.  I just had to carry him to the toilet and up the stairs to bed. Good thing he only weighs 45 pounds.

And under the cover of darkness, Mr. Yoy and I snuck into Big E's room to clean the wound and remove the glass, only to find that it had already fallen out.

I'm dedicating today to finding this piece of glass before someone else steps on it.