Greetings from Georgia, the state too busy to hate. {cough}

After reading all of the articles about Ahmaud Arbery's cold-blooded, racist-inspired murder, I decided to get my butt out of bed and join the #runwithmaud movement. Except I didn't run. My bladder is mad at me for birthing two babies. I walked. And thought about Ahmaud and his family. Killed for being who he was. I do not accept that this is where we are in 2020. How are there people like this still living in our country? In my state? How can you live your life with that amount of hate eating at your soul? I will never understand.

I thought about my adopted home state. There is no hate crime law on the books, not for not trying. It speaks volumes about who is running our state. Today. Yes, TODAY. It finally passed the house (96-64). Maybe this will be the catalyst for finally seeing some change in passing this law. 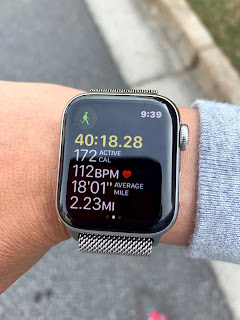 Out on my walk, I noticed an absurd amount of Canadian geese on chimneys and rooftops. I'm sure they are headed back North like all the other snow birds, but I could do without their feces all over the sidewalk. 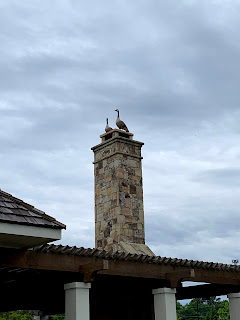 CONFESSION: I'M VERY AFRAID OF BIRDS. I'M SURE THESE GUYS WOULD PECK MY EYES OUT IF GIVEN THE CHANCE.

Upon my return, I joined the Yoysers, sacked out on the couch, playing Minecraft. I noticed an email from the Breman about a live lecture happening in a few minutes. It was about the history of the Jews in colonial Georgia. We were all in. We learned that the first Jewish families here were Sephardic from Spain and Portugal. They became fur and hide traders here. During the Spanish American war, they left Savannah and headed North as they were fearful of the Spanish. The Jews worried the Spaniards would immediately kill them based on the treatment of the Jews in Spain, probably the reason they got the hell out in the first place. Many of them intermarried with the Creek Indians, which helped them further their trading empires. 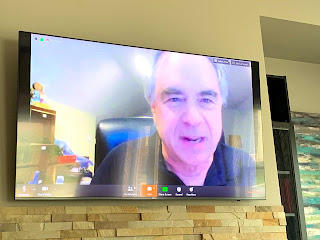 MARK BAUMAN: SMART GUY RIGHT HERE. KNEW SO MUCH ABOUT HISTORY. YAY FOR LEARNING!
Schoolwork is technically done on Thursdays, but the Yoysers motivation level on a scale from 1 to ten is (245,754). So there was still some schoolwork lingering on Friday. Little E had a class talent show at 1PM. If you know us, you know there is very little talent happening here. Unless you count armpit farts and the world's longest burp. But we do have this sweet keyboard that self plays all sorts of music. You just have to press the keys and you are off to the races. Little E faux played Twinkle, Twinkle, Little Star for his class. I'm like 99% sure his teacher was on to him, but she played along. 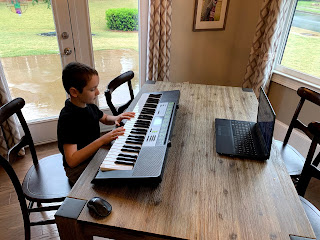 HE WANTED TO PLAY FUR ELISE, BUT I THOUGHT IT WOULD BE TOO OBVIOUS.

We interrupt your currently scheduled reading of the blog for a left-opened bag of Goldfish break. 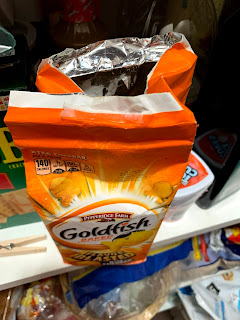 NOW STALE GOLDFISH. I. CAN. NOT.

Big E finally began working on his speech in favor of The Patriot Act. It was assigned first thing Monday morning. It is due today. He waited until 4:45PM to turn it in. I think he just wanted to mess with me. I don't operate like this and I struggle with being cool with this type of work ethic. 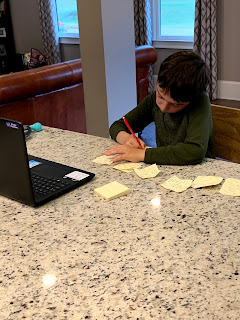 IT'S NOT DUE UNTIL THE END OF THE DAY MOM. JUST CHILL. - MY FLUNKIE SON. WRITING HIS SPEECH ON 1,000 POST-IT NOTES.

Between harassing Big E to finish up his work and closing stale snacks in the pantry, I found time to finally finish this 2,000 piece puzzle. I started this puzzle in February 2019. I tried to finish it back then, but had to put it back in the box because we needed the table for Passover Seder 2019. I took it back out at the start of quarantine and had to start from scratch. I did most of the puzzle alone. Little E came in at the end to finish up. All the glory, none of the frustration. 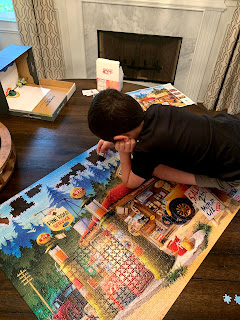 WHY YES, HE IS SITTNG ON TOP OF MY DINING ROOM TABLE. BECAUSE, CORONA.

That's all I've got, folks. Headed over to my table to celebrate shabbat and eat the sh*t out of the rest of my apple raisin challah.

Have a good night!