We are at the digital learning finish line.  No one was murdered. But words were said and feelings were hurt and hopefully we can now go forward into the unknown of the nothingness of the upcoming summer, and forget all about the struggles of digital learning.

Thursday was a good day in the Yoyser household. I logged onto a Zoom call about the Neflix show, Unorthodox, hosted by my friend and her cohorts at the AJFF. She interviewed on the of the actors and the director. I might need to rewatch the show now. 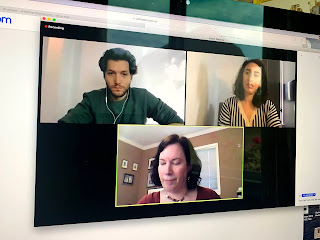 If you haven't had a chance to read Deborah Feldman's book, Unorthodox, do it. Now.

I came out of my zoom call to find all my buddies waiting for me on the counter: empty bags of food and empty wrappers. I'm going to miss these guys when my kids finally leave the house and move their trail of destruction elsewhere. 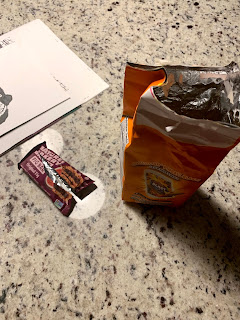 Sometimes I think it's the same bag of goldfish that keeps showing up in different places...

Big E finally decided to begin working on his last project of the school year. He had to pick a career that interested him, research it, and create a power point presentation. He snuck off to the dining room floor to work on it, because he was tired of me nagging him. I was tired of nagging him, too. 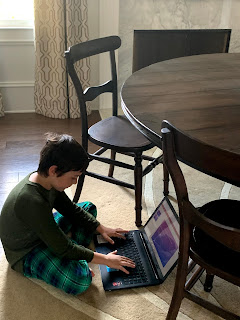 Big E made it through most of the presentation but held off on sending it until Friday. His goal in life is to turn things in at the last possible moment. It's a trait of his that I hope will serve him well one day. Today is not that day. 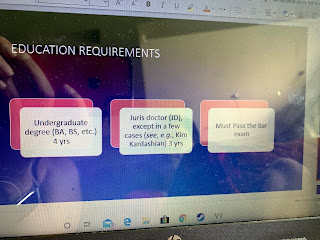 He did defer to Mr. Yoy for some information about being a lawyer. Big E got loads of useful information from his dad. And also this is the story of how Kim Kardashian ended up in his lawyer presentation, under education of all things. SMH.

Hungry from all his thinking, Big E grabbed this second (or possibly third) fig bar of the day. His gallery of loose teeth were no match for this chewy goodness. Out one came. As previously discussed, this is the part of motherhood where I run away and lock myself in the bathroom. I don't want to look at the gaping hole in your mouth. I don't want to look at the blood trickling down your chin. I just want to vomit. That is all. Leave me alone.

He left it out on a paper towel for me to get ready for the tooth fairy. But the way he said tooth fairy let me know that he was onto my silly games.

We ordered in dinner and then I went into the office to logon to the Indigo Girls Facebook live concert. They were playing Rites of Passage in its entirety and I was in heaven. One by one, my family began to trickle in. Big E sat on my lap, which he never does. Little E came over to peer at the screen. Mr. Yoy came in. 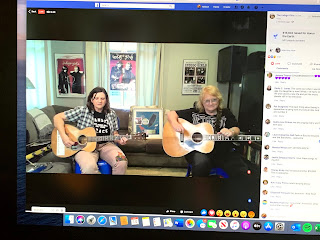 WHAT IN THE HELL, PEOPLE? LEAVE ME ALONE! PLEASE! I JUST WANT TO SING AND REMEMBER SLEEPAWAY CAMP IN PEACE.

I rolled directly from the concert onto a Zoom call with my Synagogue. When I finally emerged from the office, it was 9:45. The boys were on the couch. Not showered. Zombies. I asked them to turn everything off and head upstairs. It took a minute, but they finally made it.

They got cleaned up, changed into their jammies, and were ready for tuck-in. Little E went running and leapt into his bed. Unfortunately for him, his older brother had a played a nasty trick on him. He had put a hard cover book inside his pillow case, so Little E slammed his head against it. Tears. So. Many. Tears. I looked at the clock. It was 10:25PM. My one wish in life was for sleep. I had almost made it through this day. I was so close to crawling into bed and pretend reading for like 43 seconds before I passed out. But it was not to be so. Big E had other, malicious plans. I whispered DICK under my breath and went to go and deal with him. Little E calmed down and went to sleep.

Big E passed his joke off as something they always do when they are in Florida at my parents' house. Except we aren't there and haven't been there in awhile. Big E mentioned the tooth fairy again, but I just didn't have a drop left to give.

He tucked himself in as I finally reunited with my bed. I began to think of alibis as to why the tooth fairy was a no-show. I settled on the "she is strictly quarantining" story. And then I was out.

Luckily for Big E, my bladder is destroyed from my pregnancies, so I awoke around 2:30AM to use the bathroom. Mr. Yoy was still wide awake cranking out some client alert so I asked him if we had any money I could put under Big E's pillow. He had $1. So I ninja-snuck into his bedroom and removed the bloody tooth from under his pillow and left the money. {GAG}

I made it back to bed where I remained until close to 11AM. Because, laziness.