I first want to say Happy Birthday to my best friend who would have been 44 today. I found a funny email exchange we had with each other back when we both first had our babies and had zero clue as to what we were doing.  DOES THIS THING COME WITH AN OWNER'S MANUAL?


The buildup has been immense, but this was the actual last day of school here in Cobb. Big E had his final Zoom call with his class. His teacher put together a video of them with baby pictures mixed in with their current pictures and I stood over Big E's shoulder and watched and silently cried.

I left to grab a tissue and returned to watch the whole 5th grade video with photos of them starting as babies in Kindergarten and now as 5th graders. Again, I stood over Big E's shoulder and silently cried.

He turned to look at me. I tried to play it cool. YOU CAN LEAVE NOW.

Normally that would have hurt my feelings, but I'm so raw from everything, that I just numbly walked away to clean up the kitchen.

Big E suited up in his cap and gown, and we headed over to school for his 5th grade parade. The parade was just what he needed to get him over the funk. He mentioned to me when he was watching the 5th grade video earlier, that he remembered every year coming into the school and seeing the 5th graders gathered in the cafeteria for their send-off breakfast. He had been so excited for his, but it never happened. This was WAY COOLER.

He was able to see all of his teachers. They cheered him on and sprayed him with water and silly string. Glitter bombs were going off left and right. There were balloons and signs and the Black Eyed Peas. Everyone yelled his name as we drove by.

Um, I'm not. You are no wallflower, my child.

I felt such relief that this event was giving us all the closure we so strongly desired. The relief. The grief. The love. The enormity of everything, I was choking back tears. But I lost my composure when we saw his third grade teacher, a woman who he dearly loves and would easily go and live with if that were a legitimate option. 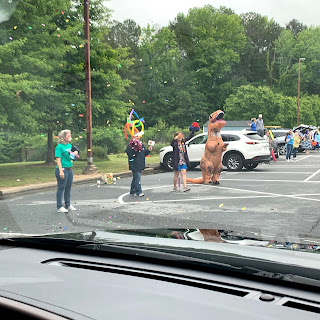 When we finally exited the parade route, Big E looked at me with such a wide grin on his face and said THAT WAS AWESOME! LET'S DO IT AGAIN!

As much as I enjoy a quick repeat ride, Mr. Yoy and I once went on the Little Mermaid ride like four times in the span of 30 minutes one evening, right before the park closed, this was a one-time cruise down memory lane, or is it is now called Janky Way. But that's a different story for a different day.

We left school to pick-up a celebratory lunch of fast food. Big E chose Wendy's. And so did everyone else in East Cobb. We tried all the fast food drive-thrus before Mr. Yoy had to get back for a call.

After Mr. Yoy's call, we FaceTimed with Little E in Orlando. He gave us a run down of all the junk he was eating and all the minutes he had spent in the swimming pool. I miss his angelic face, but I do not miss the constant fighting and wrestling. I'm not continuously pushing the couch back to where it lives and picking up my decorative pillows from all corners of the first floor. Sometimes the bathroom. GAG.

A neighbor had organized a Kona Ice Truck to come around 4:30PM. A perfect way to kick off summer. Except our start to summer was eerily reminiscent of last year's Halloween when we all froze to death. But these kids have been through so much, a little touch of Winter was not going to keep them away from shaved ice. 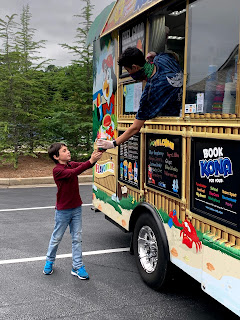 A FRIEND TREATED BIG E TO HIS KONA ICE AS A GRADUATION PRESENT.

Their sweet bus driver stopped by to say hello to everyone and wish the 5th graders well. It was definitely a celebrity sighting for the kiddos. Everyone loves Mr. Bob. And so do I. Because he never kicked Big E off the bus, even though I received two or three or maybe four calls from him regarding Big E's affinity for the F bomb.

The evening ended with Big E and some friends building a Minecraft world together on our back patio. 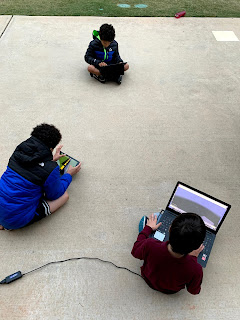 THEY ARE WEARING JACKETS FOR THE LOVE OF G-D!

Mr. Yoy cooked us delicious cheesesteak omelettes and Big E reflected that this was a really fun day. It gave us both a glimpse of what we are craving. Normalcy.

I'm off to try and get this kid in the shower. Bedtime has been creeping later and later and pretty soon he'll just be staying up all night.