Today was a big day. I had to go to the Yoyser's school to pick up their stuff that they left behind in March. Back when we were all complaining that they'd be out until after Spring Break. Oh. The horror. Back when we joked that if they weren't back in school by my birthday, I'd be disappointed. Oh. THE. HORROR. Back when if you'd have told me that I would spend the next 60 days straight with my children, without CycleBar, without my mani/pedis, without my bra, I would have laugh/cried. OH. THE. HORROR.

We were allowed back in, in very small groups with strict instructions. Wear a mask. Grab their bagged items, their yearbooks, and get the heck out. Everything was one way. I did have a chance to see their Principal one last time, as she is being transferred to another school. I wanted to hug her and thank her for all she has done for my boys over the past five years, but that wasn't going to happen. So behind my masked face, I tried to pour all of my emotions into an appropriate level THANK YOU.

We were told to bring a wagon if we had one. I've seen those wagons. Pulled around by families with sporty sons who own and use multiple bats in little league and/or organized families heading to the beach. We are more of a carry more than our backs will physically allow and make 32 trips to the car kind of family.

If I had really been on my A-game, I would have dragged Mr. Yoy with me. But my brain is atrophying and I left him sleeping soundly in bed. I'm strong, I told myself, I can handle this. As I leaned over to grab Big E's bag, I noticed an obscene amount of extra books. Books he must have been secretly shuttling to school each morning. It was like picking up a dead body. Cool, cool. On to Little E's class I went. He had an equally as large bag. I took a deep breath, leaned down and did my best CrossFit-inspired dead lift. Ok, I've got this. I began to regret the sweatshirt I had thrown on this morning. There was a lot of sweat happening in places it shouldn't be happening.

I slowly walked towards the gym where I would then try and find their yearbooks. I managed with the help of the Principal and waddled out the door. As the sun hit my face, I realized that I had parked in the absolute worst spot. I had an expanse of parking lot asphalt to cover, dragging these two body bags and slippery yearbooks.

MERCY! I dropped one bag as I exited the gym and walked to the car with the other. And back I went. It was like a Biggest Loser challenge except I didn't win any fun prizes like scale immunity. 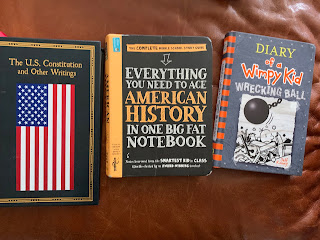 THESE THREE BOOKS EXPLAIN BIG E TO A T. NO WONDER THEY WERE AT SCHOOL.

I did pick up something else of interest at school. Little E's teacher aged him to 100 and he had to write about what he had accomplished in his life. He missed out on the opportunity to mention he still had all his hair at 100. In real life, he definitely did not inherit a good hair gene from either side of his family. Mr. Yoy and I will both be bald by 50. 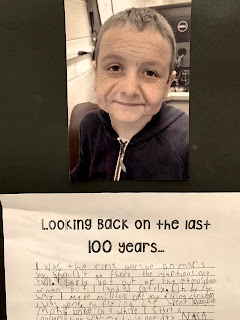 YOU'RE WELCOME FOR THE NIGHTMARES

New for this week on the home front, both boys have loose teeth. Loose teeth are extremely high on my scale of things that make me want to vomit. I don't know why, it just sets me off. They use every opportunity to wiggle them at me with their tongues. They are like bouys, bobbing around in their mouths. It's not helping my effectiveness as their school teacher, when I prefer to talk to them with my back to them.

Also new on the home front is Mr. Yoy. He's been working from home all week. Perks include freshly baked Krispy Kreme donuts. 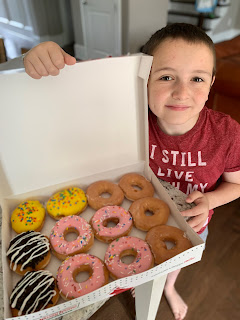 There are four of us, five including the poodle. Unsure why Mr. Yoy ordered us 24 donuts. He said they were for his "new co-workers" which I suppose is code for family. Maybe he was counting all the neighborhood kids who congregate in our backyard.

All I know,  is that I spent a lot of time at the computer today doing non-profit work. I did not feed my kids any meals, and a significant amount of donuts were eaten.

Another perk of having Mr. Yoy around. He cleaned out the freezer and has been going through its innards, making meals of what we have squirreled away in there (besides the obscene amount of riced cauliflower). 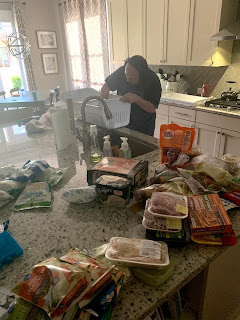 He sings 80s hairband music while competing in his very own chopped episode. It's very endearing.

It's all been very tasty and I'm so relieved to not have to prepare any meals. Pulling out Lunchables and peeling back the top can be very fatiguing for me.

And with that...I'm off to dreamland. Hopefully it's not full of 100 year-old Little E following me around, asking for cuddles.