June 06, 2012
Last summer, Big E gave us a hard time every morning before camp.  Once he was there, he had a great time. But the camp anticipation was a whole other, painful story.

Monday and Tuesday went off without a hitch.  He jumped right up in the car and didn't break into tears as we exited Riverside Drive.  I felt like we were over the camp hump.  Relief steamed off my shoulders.

And then came today.  Wednesday.  Day three of many, many, many days of camp this summer.

Mr. Yoy backed the car out of the garage.  Both boys were standing on the porch.  I opened the car door and turned to get Big E.

I DON'T WANT TO GO TO CAMP!

Big E took off.  Running as fast as his short legs could take him.  Down the hill, towards the model home.

He kept running.  It was way too early for me to go chasing after him.  I had not eaten my breakfast nor had any caffeine.  I was useless.

In the meantime, Little E was trying to climb into the truck.  He was about halfway there.  We pretended Little E was going to go to camp in Big E's place.

Big E came running back up the hill.  He made it about halfway.  He was hysterical.

I WANT TO GO TO CAMP!

My patience was spent for the day.  I wanted to yell at him.

SYBIL.  GET IN THE CAR NOW!

But I didn't.  Instead, I pulled Little E out of the car.  He was obviously mad.  He began shrieking.

We were disrupting the whole neighborhood.

I scooped up Little E, took him inside, and locked him in his playroom.  That went well.

I ran back outside.  Big E had run away again.

I was desperate.  I jumped in the car like Mr. Yoy and I were leaving.

That was enough to draw Big E back up the hill.  I was praying our neighbors weren't peering out their windows.

THOSE YOYS ARE RIDING THE CRAZY TRAIN. AND ARE TERRIBLE PARENTS, TO BOOT.

I buckled a crying Big E into his car seat.  I waved and ran back inside to a screaming Little E.  I glanced at the clock. It was 8:30, way too early for all this action.

Mr. Yoy called me about ten minutes later.  Big E was still crying.  He wanted to say goodbye to me.  Only then, did he finally calmed down.

Later, Mr. Yoy told me that upon arrival at camp, these words came out of Big E's mouth. 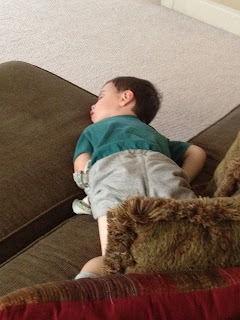