As we began the ride back to our 'hood, I asked Big E what he did today.

The weather was finally decent after two mornings of rain, so the kids finally were able to go swimming.

Big E loves to go in the pool.  From about 1:40, the point when he told me about swimming, until I pulled the big red bus into the garage, Big E tried to convince me that he did not need a bath later.

I WENT IN THE POOL, SO I AM CLEAN.  I DON'T NEED ANOTHER BATH.

A smile crept onto my face.  I love to see how a three year old's logic plays out.

I explained that the pool was not necessarily clean.  I withheld the whole urine in the pool scenario, as I didn't want to give him any inspiration.

He repeated his argument many times.

I know I complain immensely about never seeing Mr. Yoy, but now that I think about it, he's always around.

As I sat there, discussing bath time with Big E, I realized it.  He is Mr. Yoy.  He is arguing his way out of a bath. And he's using his own sort of logic.  Simply amazing.  And scary.

If Big E's arguments aren't enough for me, I just need to look at Little E.  He is a Yoy clone.  It is hilarious.  And scary.

Anyway, Big E wasn't convinced by my reasoning. Shocking.  I pulled out the big guns.

SWIMMING POOLS HAVE CHLORINE IN THEM AND IT IS BAD FOR YOUR SKIN.  YOU NEED TO WASH IT OFF.

Big E digested that for a second, and then knowingly replied OK.

Wow, that was easier than any argument I've ever had with the real Mr. Yoy.

Except two minutes later he told me how he didn't need a bath later because he already took one.  In the pool. 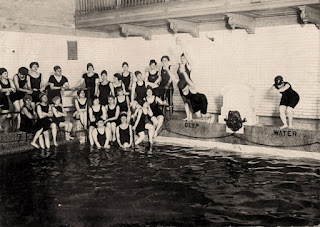