The Closest I'll Ever Come to Christmas Eve

August 14, 2012
A new era is beginning in the Yoy household.  Tomorrow will be the first day of school for the Yoys.

Yeah, yeah, you've seen it already plastered all over Facebook.  Pictures of every one's kids sharply dressed with fresh haircuts and giant grins.  I will not abstain from said pictures tomorrow, by the way.

But what I'm referring to is a monumental event in my life as Mrs. Yoy.  This will mark the first time EVER that I will have regularly scheduled breaks from the Yoys for eight hours a week.

In the past, I have had babysitters that would come once a week for a few hours during the day so I could get some sleep or go to Publix, but never eight hours.  Over two days.  Eight hours feels like such a luxury.  Eight hours of an empty house.  I could lay in bed all eight hours if I wanted to.

Aunt Yoy and I have been talking about August 2012 since Little E was born.  It would be my pay day.  I believe we actually referred to it as the Promised Land.

Raising two little boys with very little help is next to impossible.  I know I will look back in ten years and marvel at my survival skills.  It's not that I don't love my little guys dearly, it's just some things are meant to be done alone.

I thought I'd compile a list of things I will now be able to do.  Without comments, critiques, or tantrums.

1) Gyno Visits.  Yep, I'm going there.  I brought Little E with me on my last trip.  I had no other choice.  At least he isn't verbal enough to tell people about what went down.

2) Publix.  Oh, where do I begin?  Currently, we cannot go without shopeating.  Shopeating is a word I made up.  A combo of shoplifting and eating. Basically, it's my kids opening grocery items as I place them in the cart and shoving food into their mouths like they've never been fed before.  Then having the checker scan empty boxes and containers as I sheepishly smile.  I feel like if they can eat them before I checkout, they should be free.  Maybe I should suggest that on Publix's website.

3) Showering.  Some days I have to make a choice.  Do I shower and get critiqued by Big E or do I just make my way about town as a dirt bag?  Big E has already pointed out my cellulite, varicose veins, and my C-Section scar.

Why do I feel like some borderline chunky chick pledging a sorority?  Is he going to bust out the Sharpies next and circle my "problem" areas.

But Little E is no angel.  He just presses his angry face up to shower door and screams for the duration of my shower.  Talk about relaxing.

4) Lunching.  Eating a meal without the pressure of a food eating contest will be awesome.  I love going out to eat.  I hate the looks on people's faces when I'm sat next to them with the Yoys in tow.

THANKS FOR RUINING OUR LUNCH!

That's what their eyes tell me.

From this point forward, or at least on Wednesdays and Fridays, I will actually chew, taste, and swallow my food. Just like my mom taught me.

5) TV.  Big E is obsessed with TV.  I don't even like to turn it on anymore because it usually gets hijacked by Big E and I'm stuck watching Disney, Jr.  I end up with 1,400 hours of DVR'd shows that I can only watch after the Yoys go to bed.  This is a Catch 22 for me, as I cannot keep my eyes open while watching TV past 9pm.  This results in our DVR being dangerously close to full and if this causes one of Mr. Yoy's beloved shows to not record, we are all in deep sh*t.

6) Exercise.  I don't really exercise THAT much, but maybe having some free time will help me make this more of a regular part of my day.  And also putting it in writing.

In closing, I want to reiterate that I FREAKING LOVE MY SONS and I'm sure I will shed a tear (maybe) when they head off to school tomorrow.

I also love me and I'm hoping this break will recharge me and make me a more patient and fun and awesome mom.

Also, I want to give a special shout out to the babysitters that have helped out with the Yoys over the past few years.  You and blogging and wine have made my survival possible. 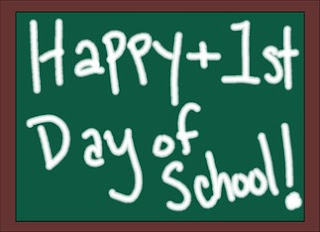